Blues sit on the top of the table 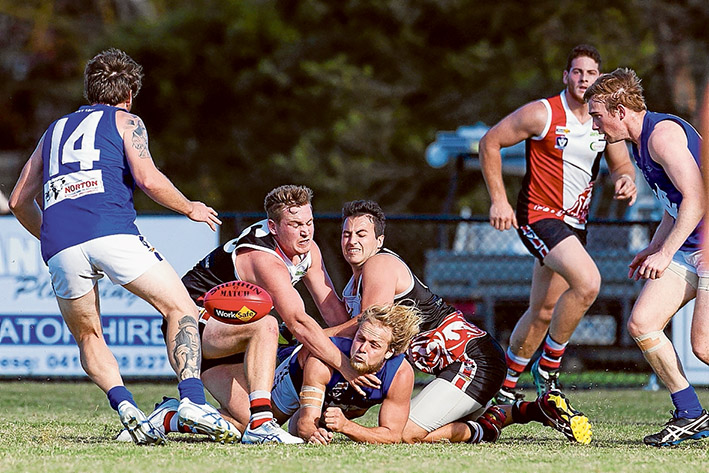 HASTINGS remains unbeaten and on top of the Nepean Division ladder after a fighting victory against Devon Meadows on Saturday.

The enigmatic Colin McVeigh had a quiet start to the afternoon but a masterstroke from runner Peter Mereszko saw the Blues star shifted to full forward in the third. The result was two third and two final quarter goals to McVeigh.

The move also involved Luke Hewitt going higher up the ground. He took a number of telling marks when it mattered across half back to help seal the win.

Young Ben King was a solid contributor in the ruck for the Blues in the absence of Josh Mulheron, who will be missing for up to eight weeks with a fractured cheekbone.

The Blues also went into the match without star forward Luke Clark, who hurt his AC-joint (shoulder) in the clash against Frankston Bombers on ANZAC Day.

Shaun Foster is a gem and he was at his finest on Saturday with three goals, while Nick Gray and Pete Mawson won plenty of the footy through the middle of the ground. Paul Rogasch booted four goals playing as a key forward.

Devon Meadows is making steady progress in 2016. After being almost eight goals down at half time, the old Devon Meadows would have thrown in the towel.

However, the Panthers booted eight goals in the third term and drew level. They also went toe-to-toe with the Blues in the final quarter.

Patrick Harmes is a star of the competition and is incredibly underrated, while Jack Hazendonk and Jayden Sullivan were tireless.

Where to for Crib Point?

The Magpies recruited extremely well in the pre-season and there was enormous optimism for the year ahead.

Four rounds later, the club is on its knees after a humiliating 98 point loss to Sorrento.

This time last year, with an inferior list to what ran out on the weekend, the Magpies overran the Sharks in a massive upset.

The Magpies play like individuals, and on Saturday, the cracks began to open wider.

Arguing on the field and between leaders saw the Pies boot just one goal in the opening half.

The Pies managed to boot six last quarter goals to add some respectability.

Crib Point coach Taylor Stratton was named in the best players but from all reports was “hardly sighted”.

Paul Smith was the standout with three goals while James Cook rarely doesn’t give his all.

Take no credit away from the Sharks though – their stars were at their best.

It would be very interesting to be a fly on the wall at Crib Point over the next couple of weeks.

What a match it will be this weekend when the Pies play Tyabb.