Bulls charge home for a draw 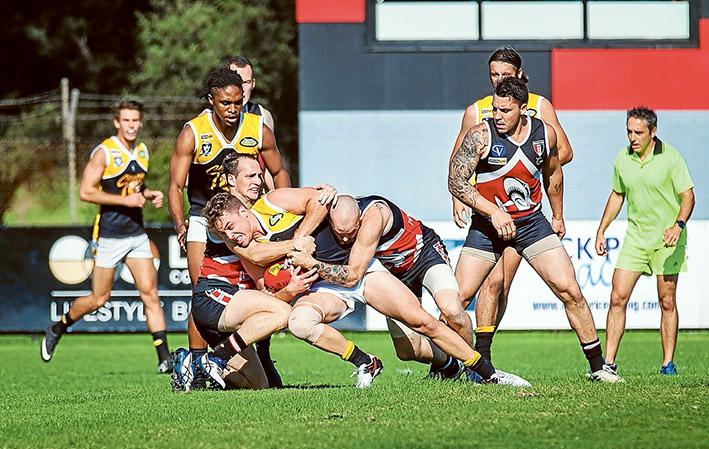 KARINGAL almost doubled its score in the final 16 minutes of the match to draw against Seaford in Peninsula Division football on Saturday.

At the 12-and-a-half minute mark of the final quarter at Ballam Park, Tigers’ star Aaron Walton kicked his second goal of the afternoon and put his side 30 points in front.

At that stage, it was the biggest margin of the day and a Karingal revival looked remote.

However, led by a dominating Grant Goodall in the ruck, Cal Dixon through the middle, Michael Burke in attack and Aaron Paxton and best on ground Duncan Proud in defence, the Bulls unleashed the shackles and attacked the top of the square.

Seaford completely stopped running at the ten minute mark of the last quarter. Had it not been for the experience of Dean Williamson and Kyle Matthews in the tense final minutes, Seaford probably would have been overrun completely.

It was a special day for three-time Seaford premiership player Joe Hallal, who ran out for the 200th time after making his debut in 2000.

The day wasn’t so special for gun Karingal recruit and full forward Leigh Poholke, who left the field in the opening term with what appeared to be an ACL injury. Scans will confirm through the week.

Jackson Mockett was superb for the Tigers and one of their best with a game high four goals, while Matt Herbert was outstanding in the first half.

This week should see the return of Jake Kelly and Chris Hay for the Bulls.

A Shane Paterson led Langwarrin booted 12 goals to one in the second half against Edithvale-Aspendale to notch its first win of the 2016 season.

With Kangas president Dave Nelli telling the RPP Footy Show on Saturday morning that the club had embarked on a rebuilding strategy, the evergreen Paterson did everything he could to ensure that his young charges got over the line, 12.13 (85) to 9.12 (66).

The Eagles led by 22 points at half time after making the most of the strong wind, however, could only manage just one more goal for the game.

Paterson took control of the team while coach Brad Dredge got married (the day was planned before he was offered the Langwarrin coaching job).

Angus Macguire and Lochie Brodie were the best of the Eagles, while the more experienced Tim Mannix and Jeremy Heys worked tirelessly.

A fit and firing Tim Bongetti booted seven goals for the Pythons in a devastating display while Paul Scanlon and Luke Potts dominated through the middle of the ground.

Warwick and Joel Miller were once again the best of the Doggies while Will Goosey played his best ever game of senior footy.

Bonbeach coach Steve Hughes told the RPP Footy Show live in the studio on Saturday morning that his side had nothing to lose and everything to gain against the yardstick of the competition in Frankston YCW.

The Sharks are now the only side in the competition without a win and sit on the bottom of the table.

The Stonecats had nine goal kickers with Dave Bodley booting six and Paul Minchington, Anthony Bruhn, Lew Roberts and Sam Widdowson all kicking three each, while two of the most exciting players in the competition, Ryley Hodson and Ben Credlin, dominated.

Shane McDonald, Chris Bryan and Beau Bailey were the best of the Sharks.

Mt Eliza trailed Chelsea by four points at half time on Saturday before booting eight goals to one in the third to blow the game apart.

Nick Strickland booted four for the winners while a further eight players contributed on the scoreboard.  Anthony Cleary was outstanding.

Josh Tripcony and Grant Trew were fine contributors for the Gulls, along with Jack Francis.