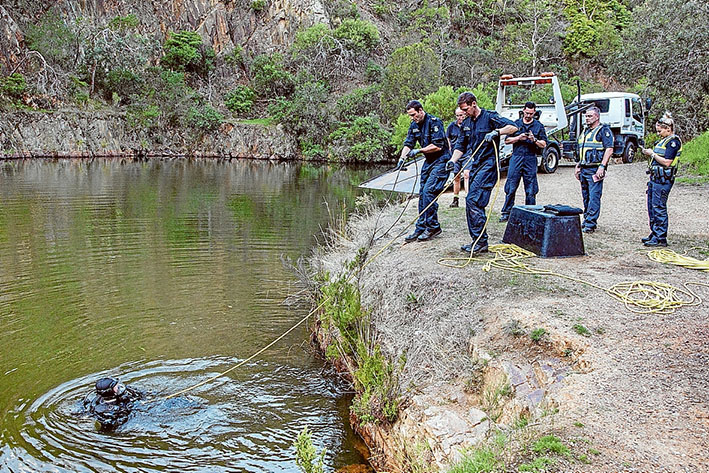 Making a splash: Police search for a car reported by early morning walkers who saw it sink in Moorooduc quarry soon after it was driven through a gate from Station St, Mt Eliza. Picture: Gary Sissons
Share
Facebook Twitter LinkedIn Pinterest Email A QUIET morning’s walk at Moorooduc quarry for two friends last week was ruined when a stolen car smashed through wire gates and was driven into the deep water.

It is believed two young men had been in the car – one possibly jumping out before it hit the water and the other breaking free and swimming to shore before it sank. Events are unclear as no one actually saw the pair leave the car.

Frankston South resident Sharon (surname withheld) and a friend heard a “car come flying through the [locked] gate where the ranger has access”.

“We didn’t see it then, but we heard it and later we saw the gate had been ploughed down,” she said.

“We saw the car come flying by and then we heard a loud splash in the water.”

The car – possibly a Toyota Prado stolen from Frankston South the previous day – was half submerged “nose down and a fair way out” before it sank.

“We don’t know if the windows were down, or even if there was anyone in the car at the time,” Sharon said. “It all happened so quickly we can’t make sense of it.”

The pair had a split second earlier seen a young man, described as being caucasian, early 20s, long hair, wearing a hoodie, walk past them towards the road. “We assume he was from the car, but have no way of knowing,” she said. “He certainly didn’t look like the people who walk there at seven in the morning.”

While calling police they heard another man getting out of the water. “He was a long way from where the car went down and so we don’t know for sure whether he swam from it or not,” she said.

“My friend saw him walk away from the water and disappear.

“It freaked us out; it’s not something you expect to see – the whole thing was bizarre.

“If we hadn’t been there no one would have seen any of this and no one would know where the car had gone. We feel sorry for the owners.

“The whole thing’s been playing on my mind – not knowing if we could have done something to help.

“We have the peace of mind knowing that the people got out but, until they pull the car up, we have no real way of knowing if they were the only ones in it. We’ve been in shock.”

Search and rescue squad members were called to the quarry on Monday to search for the car but another drama – searching for a man lost in the bush at Merrijig – was given priority. They did not attend the scene until Thursday.

Leading Senior Constable Christopher Bird, of Mornington police, said a patrol of the area failed to find the young men. He downplayed suggestions of gang-related activity and said there was nothing to suggest anyone else was in the car when it hit the water.