Seachangers left without a boat 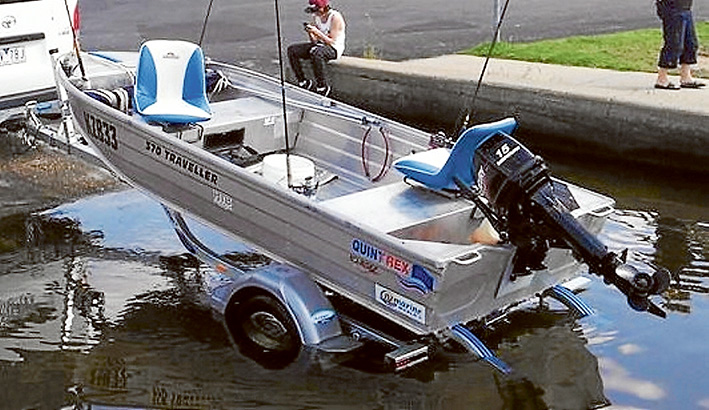 THE joys of a sea change to Balnarring have been undermined for new residents Phil and Janet Eyles as they struggle to get over the theft of their Quintrex 370 Traveller, trailer, lifejackets and other safety gear.

The boat was stolen from their backyard in the early hours of Tuesday last week, despite it being chained to a caravan and a padlocked towing ball.

Mrs Eyles, who said they moved from Ringwood East last October, awoke at 4am but heard nothing out of the ordinary, while her dogs slept on undisturbed in the workshop.

“We moved to the area late last year to get away from traffic and city living, but it seems that the serenity of Balnarring has been snatched away from us,” she said Thursday.

“We thought we were safe but the thieves used bolt cutters and then pushed the trailer down the street to where a car was parked and towed it away.”

The couple’s 1300 square metre block is secluded, but a walkway gives a view of their yard. “We suspect someone has seen the boat and passed on the information to the thief,” she said.

“I just want to alert people in the Balnarring area that thieves are very active.

“We felt we lived in a very safe area and can’t believe that anyone could do this.

“People should be made aware of these low life people who destroy other peoples’ happiness.”

The couple have reported the theft to police and have scoured social media and trading sites without success. “I feel helpless as to what to do,” Mrs Eyles said.

The couple had just paid $300 for lifejackets and the boat contained many accessories, including two swivel seats.

“You don’t realise how these things affect you,” she said. “The neighbours have been very supportive.”

Constable Sam Purdon, of Hastings police, said residents should ensure items such as boats, trailers and caravans were shielded from the street. He said the Water Police was handling the theft and the boat’s details had been flagged on their system.

The Quintrex 370 traveller has a 15hp Mercury outboard, year old Dunbier trailer, two blue swivel chairs, two Marlin inflatable life jackets, bimini, and other boat accessories. The registration number is KZ833 and the trailer number is V40614. Anyone seeing the boat or trailer can call Crime Stoppers on 1800 333 000 or Constable Purdon, 5970 7800.