Jewell has the last laugh 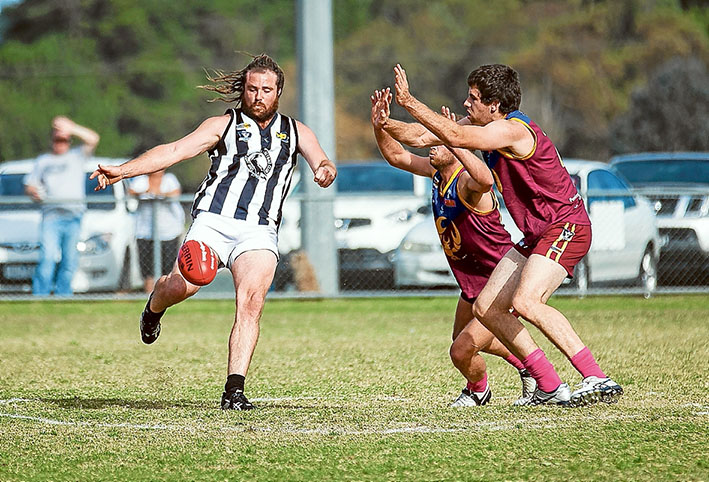 OFF the field, it was built up as Rosebud Football Club versus former premiership coach Nick Jewell.

On the field, it was nothing more than getting the four points for Jewell’s new club Sorrento and the Buds.

It went to the wire. One point separated the sides at the final siren after Sorrento controlled the match for the larger part of the contest.

However, with Luke Tapscott in hospital after copping a head knock, Nick Muller off the ground with an AC joint injury and Trev Mattison tearing a hamstring, the Sorras could do nothing but hang on as the visitors and reigning title holders came charging.

Sorrento forward Nick Corp was the dominant player on the ground with four goals. He could have finished with double that had it not been for inaccuracy.

At the end of the game, Jewell turned to a portion of the Rosebud crowd, grabbed his Sorrento club polo and kissed the emblem.

“It was just a case of showing some of the Rosebud supporters that this is where I am now and I’m loving it,” Jewell said.

“I didn’t hear from the Rosebud crowd all day until the last quarter and I really took offence to what they were saying to ‘Forry’ (Rob Forrest), who was on the bench with me.

“I cop it all the time and it doesn’t bother me but Forry didn’t deserve it.

“I went and spoke to the Rosebud players on the ground. I love them and have nothing but respect for them.

“Unfortunately, it was just a couple of the monkeys in the gallery that I had a problem with,” Jewell said.

The Sorrento coach was happy with his team’s performance.

“We were terrific for three quarters and fought hard to fight it out to the end,” Jewell said.

“Matto (Mattison) was sensational, getting back on the ground despite a hamstring and the good news is that ‘Tappy’ (Tapscott), who lost feeling in his left side before the ambulance arrived, has had scans and all is ok other than a very sore neck,” he said.

Both Keegan and Sean Downie were superb for the Buds.

Somerville flexed its muscles and showed Hastings that it has some work to do before it can be considered as a serious challenger.

The Blues went into the match without Josh Mulheron, Luke Clark, Mark Devereaux, Steve Robb and Scott Jansen, which certainly had them on the back foot, however when the going got tough early in the first quarter, the Blues waved the white flag.

Injuries was used as an excuse by one Hastings official at three quarter time before another official corrected him and simply stated the Blues were ‘limp’.

Other than Jake and Luke Hewitt, Shaun Foster and Peter Mawson, the Blues didn’t give a yelp.

Hastings were bullied off the ball, were second to the footy, played from behind, didn’t chase, lacked intensity, ran forward of the footy and looked so much slower than Somerville.

Take nothing away from the Eagles, however – they did everything right for three quarters.

The only concern for the Eagles was Justin Farrelly going down just before three quarter time with a knee injury. ‘Faz’ said he hyperextended it and would be alright.

An emotional Hillmen coach Tony Blackford said it was one of the best victories he had been involved with and showed his side had enormous courage and fight.

Matt Hyden was simply sensational for the Hillmen and willed his side across the line when they needed someone to stand up.

Matt Greig again almost single handedly won the Demons the game with six goals, four of them coming in the first half.

Pearcedale booted eight goals to two in a blistering opening term against Dromana and went on to record a very convincing 18.15 (123) to 10.10 (70) victory.

The Panthers haven’t been a daunting proposition at home for some time but that certainly is changing again under the guide of coach Jamie Merchan.

Billy Quigley and Christian Ongarello were the best of the Tigers.

Frankston Bombers took its good form against Hastings one step further against Devon Meadows and beat them 25.13 (163) to 13.7 (85), while Crib Point won its first game of the season, beating Tyabb with Brad Davidson booting five goals in his 150th game.