Sharks turn it around 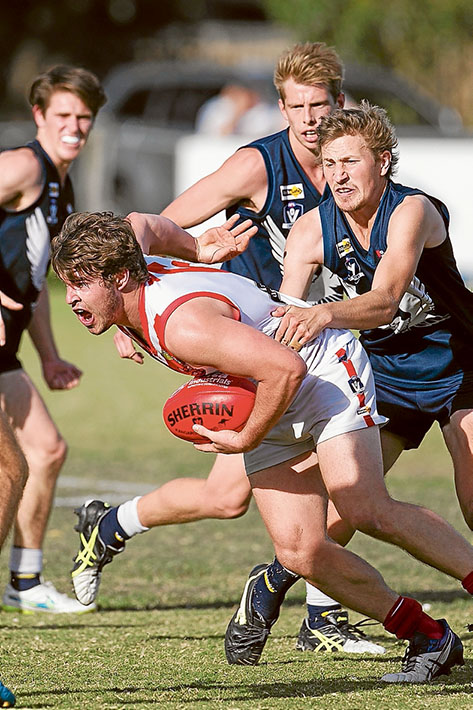 BONBEACH went from being belted by Frankston YCW by 114 points in round four to causing the upset of the season a week later in MPNFL Peninsula Division.

Sitting on the bottom of the ladder without a win in 2016, the Sharks headed to Wooralla Drive to tackle an undefeated Mt Eliza.

By quarter time it was evident that the Bonbeach side that was hammered by the Stonecats was very different to the one that turned up at the home of the Redlegs.

The Sharks had nine scoring shots to one in the opening quarter and by half time they had opened up a 31 point lead. The lead had blown out to 46 points by the final break.

Beau Bailey was again named the Sharks’ best, a former Frankston YCW junior. Ash Waterstone got the tough job on Justin Van Unen and, despite the master booting one of the best goals ever seen, kept him to three goals.

‘JV’ was still outstanding for the Redlegs and is having a very good season under the experience of a new coach.

Bonbeach coach Steve Hughes said on Sunday morning that “the coffee tastes better and the paper is a more enjoyable read after a win”.

“I was really pleased for the players that we were able to turn it around because they have been working really hard for a long time and the results just haven’t been there,” Hughes said.

“I told the group through the week that we had been in the same situation last season, where we were beaten by 100-plus by Frankston YCW in round eight and came out and beat the second placed side, Mornington, the following week.

“Maybe what happens is that YCW kick the bad habits out of you.

“It was important to have a really positive week on the track last week and have a bit of fun.

“It’s been a real stressful time for them because they have done the work and are not winning games. They deserved to get the four points,” Hughes said.

Bonbeach was a lot hungrier this week, stuck its tackles and used the footy well; all areas where they fell down the week before and during important moments of previous matches.

Hughes said Damon set the tone for the day with his attack on the footy.

“Luke is a real competitor and he’s a real football purest. He split open some packs early and that really got us going,” Hughes said.

Frankston YCW again made light work of an opponent – this time it was Pines.

David Bodley was outstanding with five goals while Paul Minchington was at his absolute best with three majors.

Chris Guganovic and Adam Mariner were the best of the Pythons.

At quarter time, the Tigers had watched the Kangas have 13 shots at goal and lead by 32 points at the break.

However, through Josh Stokes, Kain Taylor and Brendan Dawes, worked their way back into the contest.

By half time the Tigers had booted seven goals, kept the opposition scoreless and led by nine points.

Mornington got their season back on track against Chelsea, although the scoreboard would suggest that the Gulls kicked themselves out of it  – 7.19 (61) to 13.11 (89).

Michael Gay was back for the Dogs for his first game and he made a significant impression, as did Jackson Calder with three goals.

Beau Caia and James Sivijs were the best of the Gulls.

The Eagles set up the win with a six goal to two opening quarter, Mick Meehan booting four and Brendan Neville again best.

Jordan Kelly and Chris Hay, both back into the Karingal line up, booted two each, while Harry Czarnecki collected the top award.