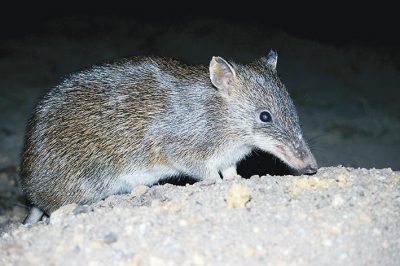 DESPITE the best efforts of environmentalists and some government departments the survival of the southern brown bandicoot remains uncertain.

With few viable colonies of the small marsupial remaining around Frankston and on the Mornington Peninsula its “endangered species” status was last week reaffirmed.

Foxes, feral cats and land clearing are among the bandicoot’s biggest threats.

Environment Minister Greg Hunt told a biodiversity forum organised by the Western Port Biosphere that he agreed with the southern brown bandicoot staying on the endangered list.

His announcement on Friday 6 May came one day after 49 extra species of flora and fauna were added to the federal government’s threatened species list.

Mr Hunt told the forum he was “delighted to provide an update on our work for threatened species”, but apparently made no mention of the additions to the list.

Mr Hunt said money from the federal government would help Western Port  Biosphere protect 184 hectares of remnant vegetation, with 36 hectares “revegetated by the end of this year in this wildlife-rich region south-east of Melbourne”.

“Landcare groups, councils and park managers are working together to help connect and improve wildlife habitat corridors. The project will help species such as the southern brown bandicoot and the hooded plover, one of the 20 priority birds under our Threatened Species Strategy,” Mr Hunt said.

Parks Victoria has announced that from November it will ban dogs from beaches within the linear Mornington Peninsula National Park as part of efforts to prevent the hooded plover becoming locally extinct.

“A local predator control strategy is also in place in the Western Port Biosphere, supported by camera-trap monitoring of feral cats, foxes and the southern brown bandicoots they prey on,” Mr Hunt said.

He said the national Threatened Species Strategy “is on track to achieve its 2020 targets and is already delivering real wins for our native animals and plants”.

“Less than a year on from its launch, this new roadmap to help fight extinctions of our native flora and fauna is benefitting at-risk species with targeted, practical action. With almost 1800 of our species listed as threatened, Australia needs to work harder and smarter to secure their future.”

Mr Hunt said that since 2014 the 20 mammals and 20 birds had been nominated as priority species with the government “committing to improving their trajectories by 2020 and funding recovery actions for each of them”.

A task force had been established to tackle feral cats, with all states and territories agreeing “to prioritise feral cat management in threatened species recovery programs”.

Australian Conservation Foundation campaigner Jess Abrahams was quoted by The Guardian as saying this year’s federal budget failed to include any new funding for the threatened species strategy.

The only mention of the environment in a budget news release issued by Mr Hunt’s office on 5 May mainly related to $171 million for the Great Barrier Reef.

“We are also committed to preserving our natural environment for future generations and are doing more than ever before to protect the Great Barrier Reef,” Mr Hunt stated.