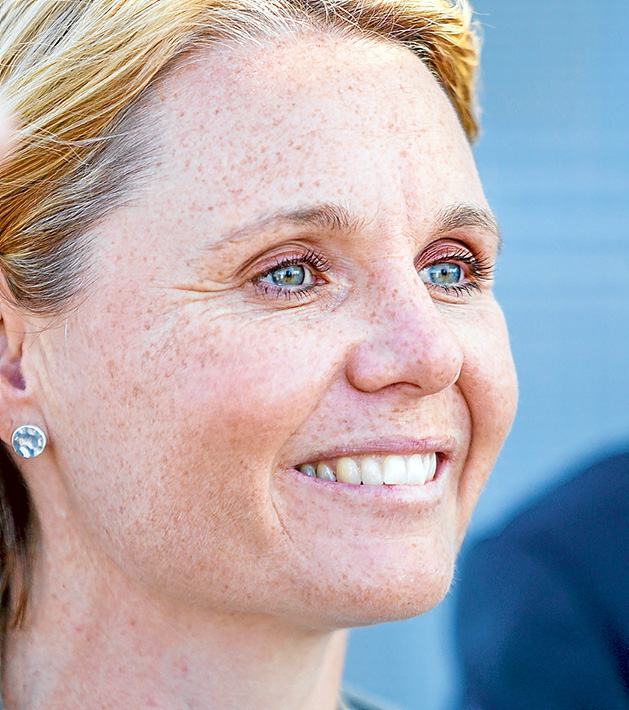 LABOR’S candidate for Dunkley Peta Murphy admits succeeding Liberal MP Bruce Billson as the area’s representative in Canberra will be a challenge but she reckons it is time for change, and not just on the personality front.

“Bruce has served this community for 20 years and they’re certainly big shoes to fill but I think people are ready for a new voice,” she told The News.

“It has been a Liberal seat for 20 years and it is time for a fresh approach. It’s time for Dunkley to have someone with a different perspective to really focus on health and education.”

Internal Labor polling shows the party is in with a 52-48 per cent chance after preferences of wrestling back the seat from the Liberal Party after two decades of Mr Billson going into bat for Dunkley.

The 42-year-old lawyer, who moved to Mt Eliza in 2012 to be closer to public sector consultant husband Rod Glover’s family, wasn’t always destined to enter the political fray but a speech by former Labor cabinet minister Lindsay Tanner at the University of Melbourne changed the course of her life.

She admits to “always being politically aware” and being “inspired by the idea of a bigger, smarter, bolder country being put forward by Paul Keating” but it was Mr Tanner’s speech at her alma matter about looking out for the less fortunate that swung her decision to join the Labor Party.

A career as a criminal lawyer followed university followed but Ms Murphy says she was determined not to spend her whole life in the political bubble.

“I was lucky enough to have a role as a justice policy adviser for a number of years in my mid-20s but made the conscious decision to go out and have a career because I did not want to be someone who talked about policy from a theoretical point of view or had always been involved in politics and had never had a career or profession in the real world.”

Practising law as a criminal defence lawyer certainly opened her young eyes to the importance of education to break “cycles of dysfunction” in low socio-economic areas of communities.

“I don’t bring one narrow personal experience. I’m a university-educated lawyer but I also understand other things.

“My career has reinforced to me the importance of education. My parents were schoolteachers … I’ve always grown up being told education is really important.

“My three sisters and I got told by our family that public schools are important, the public school system is what we went through.

“Education is what gives people the start in life and being able to have the education that makes children see their own strength and see the possibilities in their own future to get out there and be part of the community is the key to a good, prosperous community.”

Over the years her work as a defence lawyer has seen her speak up on behalf of some accused defendants who some may regard as “the worst of the worst” such as murderers and Melbourne man Joseph Thomas, dubbed ‘Jihadi Jack’ by the tabloid media, whose conviction for receiving funds from Al-Qaeda was overturned on appeal in 2013.

While not naming specific defendants, Ms Murphy says defence lawyers who work in the legal aid sector do not get to pick and choose clients.

“It can be very difficult. I think it is important to really understand what some people’s lives are like in order to bring some insight into the policies that affect people but there is no doubt it is difficult sometimes to have to be faced with some of the worst of humanity,” she said.

“My career as a defence lawyer – even when I was working at a private firm – was working on legal aid cases and defending the poor, the destitute, the disadvantaged and very damaged. It’s not a moral judgement, it’s about making the system work for everyone.

“I think people understand that a criminal justice system that is accessible and fair is actually what’s important for everyone and society.”

“Locally, the issues are often about education. Not surprisingly people with young children and children who have started school are really concerned about making sure their kids get to go to the best possible school and have the best possible education. Issues about funding public education and training and brought up a lot.”

Health funding is an issue close to her heart after undergoing treatment for breast cancer five years ago. She credits Australia’s health system with saving her life.

Voters’ discontent with political parties is also never far from her thoughts.

She is a leading light on the hill in Open Labor, a self-described “group of people who seek renewal of the Australian Labor Party and a more open, optimistic and decent politics in Australia”, and admits the ALP can do more to make politics inclusive despite having made some good process in the past few years.

“I think the party and leader Bill Shorten have made some good steps. Things like having rank-and-file membership involved in the election of the parliamentary leader has reinvigorated the party but we should keep working on it. There are a lot of people out there who would be involved in a political party that would be attracted to Labor if we keep making ourselves open and transparent to serve its members.”