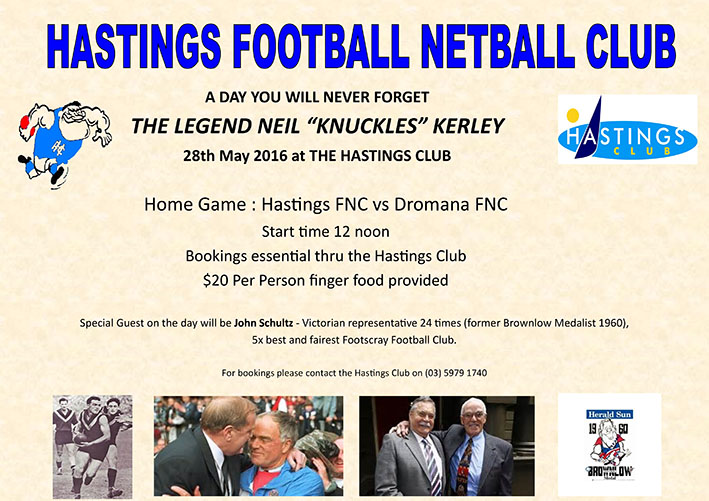 THIS week the club travelled down to the Crib Point FNC for our annual local derby.

The boys were playing for the Ron Moncrief Shield, and the game certainly didn’t disappoint supporters from either club.

The game was close right up until the start of the last quarter, when  our boys steadied to kick away to a very impressive margin 50-odd points.

This week sees all clubs have a bye week which, for our club, couldn’t have come at a better time. It will give all players a chance to recharge their batteries and get ready for our next home game verses Dromana.

Next home game: Hastings FNC vs Dromana FNC at Hastings 28th May. All games start at 10am.

WE took on our local rivals and it is always a tough hard fought contest.

The conditions were very difficult with a big cross wind blowing towards the pavilion side.

This made it a scrappy affair with both sides turning the footy over.

We had control of the game all day but we’re letting ourselves down by missing set shots on goal.

Crib came at us and really challenged  but we responded and our physical pressure and ball use in the last quarter was fantastic.

We ended up with a 50 point win and had 14 more scoring shots, so it was a great day for us.

Nathan Gray had his best game for the club kicking three from on the ball.

WE headed to Crib Point in a must win game, and came out in the first quarter with great intensity and had a first break lead.

Unfortunately our pressure dropped off in the second quarter and Crib Point took advantage.

They outscored us by four goals and we were never able to reel it in as the breeze made life difficult all day.

A disappointing result after a good start; we go into the bye licking our wounds but will bounce back.

WE travelled down to The Nest to take on Crib Point with plenty of confidence that as a team we could be competitive and hopefully steal a win.

We started really well by restricting Crib Point’s run by pressuring them whenever they picked up the ball.

By capitalising on turnovers and some great ball use Jack Winton kicked our first.

We kept up our pressure and with Fraser Rendall leading the way down back by stopping any forward entries.

We went into the break with confidence that we could continue to build on the hard work we had put into the first quarter.

Unfortunately we seemed to switch off in the second and let the opposition get a run on and if not for the efforts of Sean Hewitt and Peter Megee in the midfield and our great backline the damage would have been a lot worse.

After half time we started to get back to the basics and kept pressuring the opposition into turnovers.

In the last the boys played really well to outscore Crib Point, with Anthony Takac slotting his first goal for the club and Jesse Shore kicking a late one.

Pat Langdale put in a great game across half back, taking intercept marks and clearing the ball out of the danger zone.

Overall we have made some excellent progress in the way we pressure teams into errors. The key for coming games is to then turn those errors into goals for us.

A STRONG start by C grade saw them right in the contest in every quarter. Defenders Courtney Astbury and Sarah Kerr were fantastic and had their best games for the year. Siobhan is making great improvements with every game.

B grade had a very slow start letting Crib Point get a good lead which was always going to be hard to recover from. A few moves at half time saw a very different team play in the second half. Mikayla moving to goal attack created great opportunities for us to score. Taylah Strange and Amy Goodacre were dynamic in defence and Jorja Gay and Keely Gay provided great drive through the centre. Winning the second half was a great reward for all the hard work.

A break this week will see us all refreshed and ready to keep improving throughout the rest of the year.

Upcoming Functions: John Coleman Coterie Club Luncheon 21st May at 12pm. Special guest Greg Sewell plus the induction of ten former players/officials into the Hastings Hall of fame, with one legend being inducted. Cost $65.00 single.  Bookings through the club 59791740.