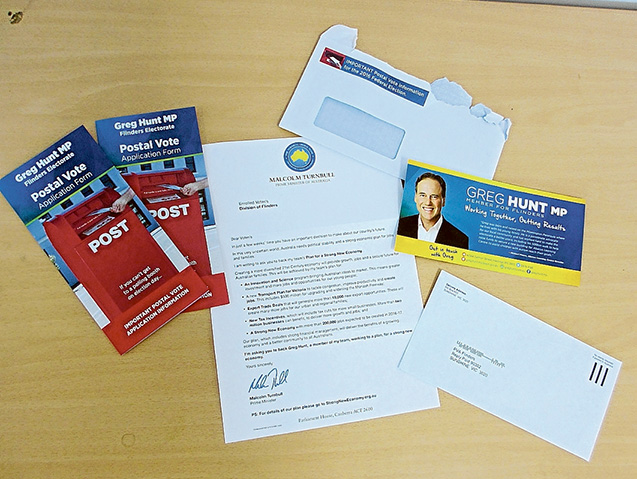 AN “important postal vote information” letter mailed out to Flinders electorate residents last week by the Liberal Party attempts to obtain personal information about voters for the party’s database ahead of the 2 July federal election.

The mass mailout addressed to “enrolled voter/s in the ‘Division of Flinders” features a letter from Malcolm Turnbull, Prime Minister of Australia urging the electorate to “back my team’s Plan for a Strong New Economy” and includes a Postal Vote Application Form sent by federal Flinders Liberal MP Greg Hunt.

Voters who “can’t get to a polling booth on election day” are encouraged to complete personal details on the application form and send the completed form in a supplied prepaid envelope.

The prepaid envelope is addressed to “PVA Flinders” so the information sent in the envelope will go to the Liberal Party first rather than directly to the Australian Electoral Commission.

The political party can then enter any information provided – including name, address, date of birth, contact details and a series of security questions including the town voters were born in and the name of the last school they attended – into its database before passing on the information to the AEC.

The Labor Party and the Australian Greens also often send out postal vote application forms to voters in electorates where the parties have a sitting member.

Political parties are exempt from privacy laws that allow people to obtain a copy of any information held about them on file.

Eligible voters who wish to vote by post before the June election can avoid passing on their details to a political party by contacting the AEC at aec.gov.au or by calling 13 23 26.

Completed forms can be sent free of charge from within Australia directly to the Australian Electoral Commission, Reply Paid 9867, Melbourne.