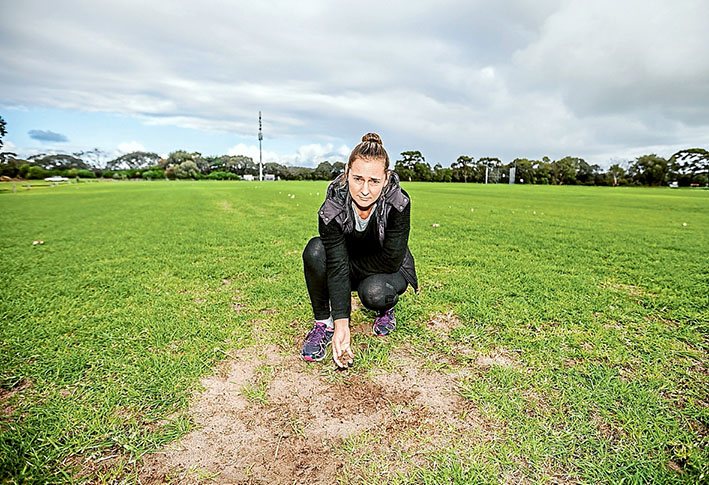 A MEMBER of the Southern Peninsula Victorian Masters Athletic Club has been told by a senior shire officer he will have to apply through freedom-of-information for information about contentious upgrades at the Trueman’s Rd track.

Bryan Baldwin, of Fingal, said the Mornington Peninsula shire had spent $37,000 on “improvement” works at the Trueman’s Rd Recreation Reserve but, considering the “current state” of the surface, doubts the was money well spent.

He wants to know where the money went and who authorised its expenditure. He says the track is now “unusable”.

Council executives, the shire’s contractor and little athletics’ club members met in March to discuss the state of the track after ground works had been completed, and to plan future works.

Masters club member Mr Baldwin said he told them that the state of the track is “totally unacceptable” and would conduct an audit of the recent work.

He said club delegates had “virtually given up on all prospects of resolving the issue and were frustrated by the lack of action”.

“The end result [of spending the $37,000 on the ground] was that no one could use the facility,” Mr Baldwin said he told the meeting.

Southern Peninsula Little Athletics Centre committee member and former president Jason Hodson said the prospect of having to use a substandard running track had led to a sharp drop in membership, reducing the club’s income and cutting canteen profits.

“We’ve lost five trained committee members and key athletes have gone to other centres, making us a laughing stock in athletics, schools and the general community,” Mr Hodson said.

“I believe someone must be responsible and accountable for this as, in two years, they [the shire] have spent supposedly $12,000 to $37,000 on failed works and there has been no attempt to improve the ground after the works failed.

“Officers are [being evasive] and councillors are avoiding the topic and hiding behind landfill [issues] every time the most basic maintenance to the surface is requested.”

Arguments about the type of work needed, and complaints about delays in doing the work, have gone on for years.

Mr Hodson: “At some point between our request for works over the past three years, the funding proposal in December and the approval in January, someone at the shire has decided to change the works and lay fairway sand across the entire venue inappropriately.

“[The sand] is not soil and has no nutrient value. It heats in summer and kills the grass. The sand was laid across the entire venue for the existing grass to suffocate and die.”

The club was told no watering had been done for the past 18 months because of faulty sprinklers, but “we have found the sprinklers have always worked to a certain degree … and that simple maintenance would allow them to clear and turn as they have not been used for so long”.

Told that the shire was talking about starting the works again, Mr Hodson said: “This goes against all suggestions by our consultants who advise the surface is beginning to recover …”

He said mains water pipes on Trueman’s Rd “could have been accessed for above-ground watering to assist in speeding the recovery after the failed works.”

Mr McDonagh said: “More recently, the shire has engaged environmental specialists to complete an independent review and provide the shire with recommendations in respect to future maintenance and upgrade options [at the reserve].

“The shire is committed to continuing the good work with the reserve committee and will actively be engaging with them, and the broader community, through the process.”

Mr Hodson agreed the shire had advised that works had been done “but we say those works were not done correctly, or that someone really doesn’t know what they are doing”.

“They say the completed works were not successful but, really, the work was not done correctly in the first place,” Mr Hodson said.

“I believe that someone needs to be held responsible, or at least give us the sequence of events [of the works].

“We are not trying to cause World War III but this (Trueman’s Rd reserve) is the second biggest sports venue on the peninsula and yet no one seems to care about it.

“And I can tell you it has nothing to do with landfill issues.”