Frankston YCW favourites for flag, as the rest play for second 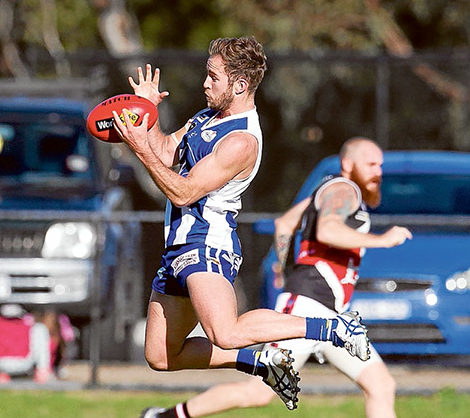 Frankston YCW travelled to Mt Eliza for a top of the table clash.

What resulted was an embarrassing 94 point drubbing.

The Stonecats are just so much better than any other team in the competition right now.

That’s something the Stonecats’ brainstrust won’t want to hear, nor the rest of the competition.

However, it’s reality. Let’s take the gloss off the promotion of the competition and admit what the whole footy community thinks.

Frankston YCW are unbackable favorites for the flag and every other team in the competition is playing for second place.

The Stonecats were missing the likes of Anthony Barry and Jack Mazurek from its best 21 while the Redlegs got a few back, including skipper Sam Gill.

The likes of Rob Turnball and Ben Landry were the only real notable absentees from the Redlegs’ best 21.

However, despite being at almost full strength, the Redlegs were still beaten by almost 100 points.

The Stonecats arrived looking for a challenge and walked away with yet another insipid performance from an opposition, especially in the second half when they booted 10 goals to two.

The first half was a reasonable contest in general play, however, the visitors made the most of their opportunities throughout, converting almost half of their 58 forward entries.

Kyle Hutchison and Tony Lester dominated through the middle of the ground and BJ Credlin controlled the back half. The even spread made it difficult to select a best player.

It was easy to find Mt Eliza’s best. James Freeman booted three and worked tirelessly in attack, Matt Lillie competed well in the ruck and Dave Barton and Rohan Heasley tried hard around the ground.

Matt Jackson had just four possesions and Matt Stanley didn’t do a lot other than kicking three goals.

The Mt Eliza experiment with playing Justin Van Unen higher up the ground has simply got to come to an end. The Redlegs have zero firepower up front and they have the best full forward in the competition playing on a wing. The opposition would just love that.

While I don’t believe that the scoreboard of 23.10 (148) to 8.6 (54) was a true reflection of the difference between the sides, it is frightening to think that the top of the table side can smash the second best side the way they did.

There simply isn’t a weak link in the YCW line up and they won’t lose a game in 2016.

Karingal withstood a second half challenge from Chelsea to get over the line by just two points.

The Bulls led by 34 points at the midway mark of the match before the Gulls hit back with a five goals to two point third quarter.

The last quarter was an arm wrestle with the Bulls causing an upset.

With Luke Potts dominating through the middle of the ground, the Pythons gave plenty of supply to their front half and they converted.

The margin was four points at half time but the home side booted eight goals to four in the third to blow the game apart.

The Kangaroos were restricted to just one goal in each half, while the Sharks booted three each hour.

Jackson Sole was outstanding for the winners while Mitch Cuthbert was very good for the Kangas.

Mark Meehan was outstanding for the winners with six goals in a best on ground display, while Chris Wylie and Stevey Mannix were outstanding.

Chris Baker and Jimmy Cameron were among the best for the Dogs.