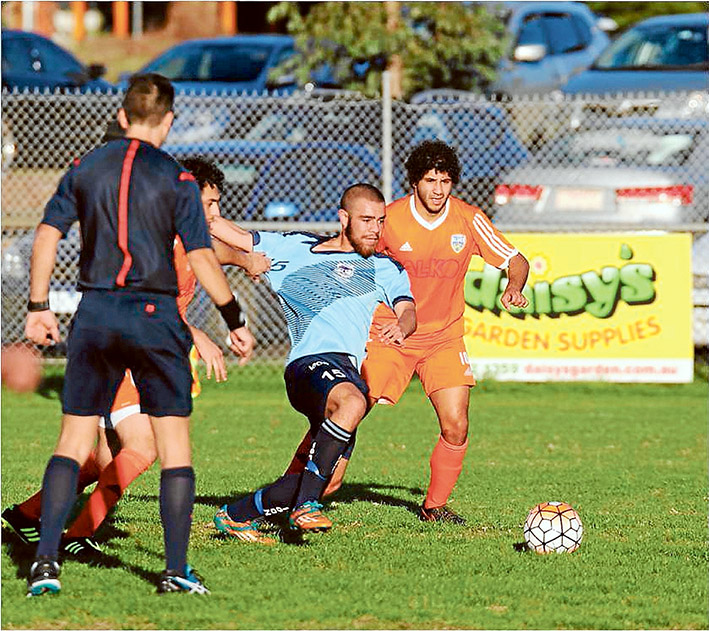 Laban Stringer and Jordan Avraham were found guilty of involvement in a brawl that disrupted the National Premier League clash at Lakeside Stadium between South Melbourne and Melbourne Victory on Sunday 24 April.

It is believed that Stringer and Avraham were with an extreme group of Victory fans, known as Northern Terrace, who charged South Melbourne fans in the second half forcing the referee to halt the match until order had been restored. FFV hired an investigator whose report resulted in 17 individuals being issued with MP10 “other misconduct” charges.

Some of those charged are current players with Football Federation Australia ID numbers and some are former South Melbourne juniors, one of whom was identified by his grandfather who was one of South’s crowd control stewards on duty that day.

Another one of those charged is understood to coach and referee at junior level.

MP10 charges fall outside the mandatory sentencing structure of most offences and the penalty is at the discretion of the tribunal or FFV.

Stringer and Avraham were charged with bringing the game into disrepute; instigating and/or participating in a violent melee; illegally entering the field of play and engaging in misconduct; and “aiding, abetting, procuring, encouraging, assisting or arranging with other person(s) to engage in misconduct.”

Avraham has been suspended from playing until 24 August this year and suspended from attending fixtures (other than as a player) until 1 January 2018.

Both players must complete an FFV Respect & Responsibility course prior to recommencing playing.

Only six of those charged attended the hearing and the 11 absentees were banned for five years from any involvement in the sport including playing, spectating, coaching and refereeing.

Stringer and Avraham fronted the tribunal without legal representation against the better judgement of Pines president Gary Hodgson.

They now have to decide whether or not to go to appeal knowing that this opens up the possibility of receiving a more severe penalty.

The Lakeside incident was captured on CCTV and South immediately arranged a social media campaign inviting people to come forward and identify those involved.

Stringer and Avraham are former Peninsula Strikers players and a junior match between South Melbourne and Strikers had been arranged for half-time in the senior game at Lakeside so there was an unusually large Strikers contingent in attendance many of whom would be able to recognise the duo.

Eventually 21 people were identified and their names provided to FFV, Football Federation Australia and Victoria Police.

A spokesperson from Victoria Police’s media unit confirmed late last week that an investigation into the Lakeside incident is ongoing and may result in charges being laid.

Meanwhile two Baxter players have each been given 16-week suspensions after both received two red cards in a spiteful State 5 South derby clash with Rosebud Heart at Truemans Road Recreation Reserve two weeks ago.

Midfielder Liam Kilner and striker Mark Pagliarulo will front the tribunal on Wednesday night to argue against the severity of their punishment.

Non-attendance will automatically increase their suspensions to 24 weeks.

The catalysts for the melee that erupted just before half-time and threatened to spill off the field were Baxter’s reactions to a controversial decision that allowed a goal by Heart striker Dave Greening to stand and a tackle by Heart midfielder Craig White that went unpunished.

In the ugly scenes that ensued Pagliarulo and Kilner were sent off for violent conduct.

Pagliarulo became involved in a slanging match with Heart head coach Scott Morrison as he left the field and was given a second red which formed a 12-week component of his suspension.

Kilner’s second red was for his reaction to being sent off which involved a verbal stoush with White and Heart’s team manager, who had charged onto the field and was yelling at Kilner.

As with Pagliarulo, that second red card earned Kilner a 12-week suspension.

It is believed that Baxter will not challenge the initial red cards issued to the duo which earned each of them four-week suspensions.