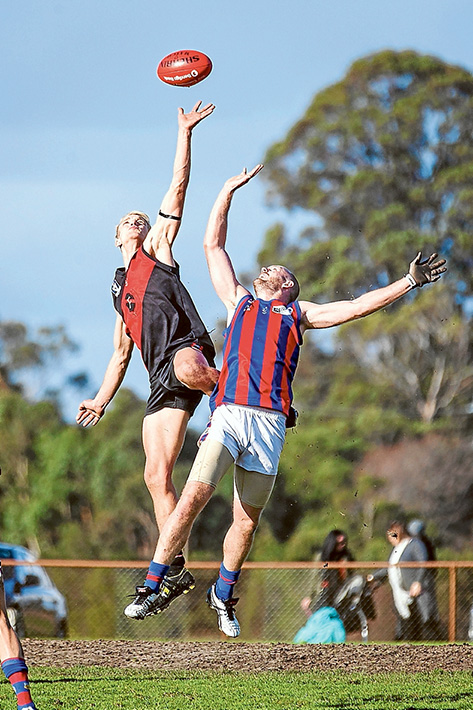 THERE are only six teams who can win the MPNFL Nepean Division flag in 2016.

One of the clubs that simply can’t win it is Rye.

The Demons were smashed for the second week in succession on Saturday by Frankston Bombers and you can imagine that the wheels are about to fall off.

The Demons were insipid against Sorrento two weeks ago in front of a packed house, including the 2006 Premiership side.

On Saturday at Greg Beck Oval, they were humiliated by 75 points – that’s disgraceful.

What’s worse is there didn’t seem to be a lot of players who actually cared.

The Demons are teetering on the edge.

Their Under 19s were belted by 199 points and they average about 13 points a game. The junior program is on struggle street compared to its neighboring clubs and its best players won’t be around beyond this season.

The club continually looks to open the chequebook and top-up with ‘out of towners’ who have zero loyalty and add no cultural value to the footy club. You could reel off a scrapbook full of them.

The same faces are running the place in 2016 as the ones who were doing it 20 years ago – heaven help them if legends Mick ‘Kicka’ O’Rourke and Scott Beel decide enough is enough and throw it in.

The Rye Football Club needs to sit back, take a deep breath and decide where they want to be in five years. At this rate, they won’t be around.

They need to invest in their juniors – forget about buying in five players at $6000 a week. Invest that in a junior program and rebuild the footy club.

Right now, the Demons are not building a club, they are simply trying to remain relevant. At the minute, they aren’t even that.

Rye has won just two games this season and are now losing touch with the top bracket.

Devon Meadows, Pearcedale, Dromana, Crib Point and Tyabb are the other teams who can’t win the title.

There’s not a lot between the top six though it appears.

Sam Fox and Michael Maiorino booted four each for the winners while a further eight players contributed on the scoreboard.

Harry Whitty and Kyle Lynch in the ruck were the best of the Demons.

Scott Lockwood played his best game for the Sharks with four goals and was really strong around the contest, while James Brigden continues his outstanding season as a key defender.

It was a wonderful contest, however, the Sharks were just a bit cleaner with the footy and took their opportunities.

For the second match in succession, Tyabb has lost a match by less than a kick.

At the halfway mark of the last quarter, the Yabbies led by a goal after Theo Oostveen goaled.

However, goals to Jayden Sullivan reduced the margin to a point and Chris Doria put the Devon Meadows in front at the 24 minute mark of the last. The siren sounded two minutes later.

Rosebud moved to fourth place on the ladder with a commanding 43 point win over Pearcedale.

Tom Baker was back for the Buds with Casey having a bye and dominated with five goals, while Ben Dwyer was superb in the ruck.

Pat Heijden and Dylan Hoare were the best of the Panthers.

Tommy Shaw was outstanding at one end for the Eagles with six goals while Scott Simpson dominated at the other end.

Paul Smith and Mornington recruit Daniel Vercoe were the best of the Pies while Dean Warry was outstanding with three goals.

Dan Noble played his best game for the Blues for a couple of seasons with three goals while Nick Gray was outstanding again with three majors also. Luke Hewitt, who was emergency for the MPNFL Sharks last week, was best afield.

Terry Wheeler and Beau Cosson were the best of the Tigers.

The Tigers have been very disappointing considering the talent they have in the team.