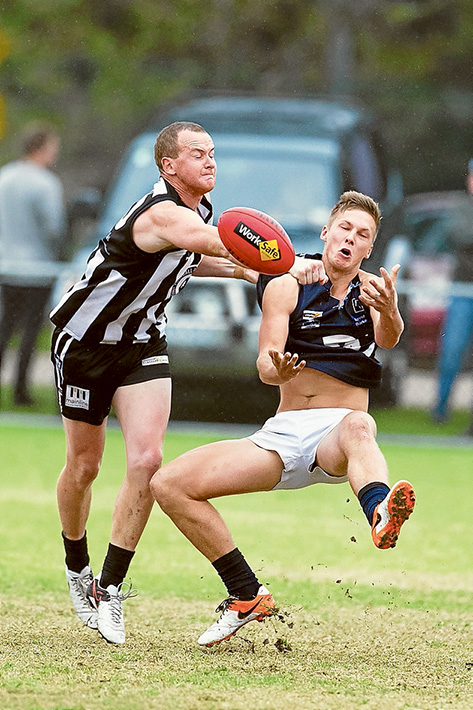 RYE responded to back-to-back lame performances and public criticism on Saturday by bouncing back and knocking over top of the ladder Hastings.

The Demons past two performances against Sorrento and Frankston Bombers were 10-plus goal hidings, however, they bounced back in the best way possible on Saturday against the Blues to win comfortably 14.11 (95) to 8.13 (61).

And the hierarchy hit back too in response to claims that it was neglecting its junior development program.

Although the club did not want to go on the record officially, a number of senior representatives made it very clear that the club was working hard at Under 19 and junior level to bring on the next generation of senior talent.

“We are working tirelessly and have done so for a couple of years now because we know as a club we have some work to do,” one official said.

“The Rye senior club has invested a lot of money and time into our junior program and we’ll continue to do that.

“You can say what you like about our performances and recruiting but we won’t cop the public spray about not looking after our juniors – we’re doing a hell of a lot in that area and its simply unfair and uneducated criticism,” the official said.

On field, Under 19 Harrison Devine-Richardson shone in his second game for the season while Ryan Mullett was again outstanding.

A couple of players the Demons needed more from were James Appleford and Jimmy Jennings and both of those players performed well on Saturday.

Matt Greig booted four goals while Matt Whelan was given his opportunity in the ones and he added a different dynamic up front with a couple of goals.

Hastings was blown away in the second half after leading at quarter time and trailing by just one point at half time.

Colin McVeigh was the only dangerous player in attack with three goals while Shaun Foster and Brendan Dunne worked hard with the classy and unflappable Paul Rogasch.

Frankston Bombers have genuine claims on the 2016 premiership.

The Bombers jumped out of the blocks and blew Red Hill away in the opening quarter with five goals to one.

Considering Red Hill’s inability to kick big scores, the game was virtually over at the first interval.

Corey Micari did an outstanding job in the ruck for the Bombers and grew as a player in one game of footy.

Dale Sutton is simply a class above most others and he was the catalyst to the big quarter time lead and ultimately the victory.

Nathan Lonie and Beau Muston provide the experience and drive while Ryan Marks Logan and Jarryd Amalfi, together with Jay Page and Al Williams, control everything else defensively and make up a  very strong back six. Zac White also adds some raw aggression and toughness to defence.

Ryan Kitchen will come back this week in the ruck and will add plenty after being rubbed out for a couple of weeks for striking no one.

In attack, the Bombers have some real potency there too.

Grant Masterson was back on Saturday and looked more comfortable as the game progressed, while Zac Longham and Scott Foster were super as leading and marking forwards.

Michael Maiorino, Brad Whitley and Jake Foster make up what is a very dangerous forward half.

The Bombers’ game style too is based on pressure, accountability, teamwork and discipline. There were no signs of the typical Bomber flamboyancy, arrogance or selfishness – they all seem to be eliminated from the new Bombers.

As for Red Hill, they are teetering on the edge.

The Hillmen simply have to readjust their game style to try and find ways of kicking a score. They average 10 goals a game and that’s not good enough to beat the best.

In other games, Rosebud smashed Crib Point by 14 goals, 19.12 (126) to 6.6 (42). When you talk about clubs who promised a lot and have produced diddly-squat, you can’t go past the Magpies. What a waste of a season it has been for the black and white. As for the Buds, they are right in flag contention.

Dromana bounced back and got the job done against Tyabb, winning 13.16 (94) to 7.5 (47). Rikki Johnson found himself in the front half of the ground and booted five goals. After a couple of good weeks, the Yabbies just weren’t in it on Saturday.

Somerville had 40 scoring shots against Devon Meadows and won 18.22 (130) to 9.10 (64). The news on Beau Miller and his tough battle against cancer has rocked the Meadows and football has become very much secondary for this footy club in 2016.

Pearcedale went toe-to-toe with Sorrento in the first quarter but were blown away in the end 24.10 (154) to 12.8 (80). Heath Cameron, Dave Lawson and Guy Stringer all played in the reserves. If the Sharks have a deficiency it is down back and Cameron and possibly Stringer will help in that area. Gun key forward Myles Pitt is also due back in the coming weeks.