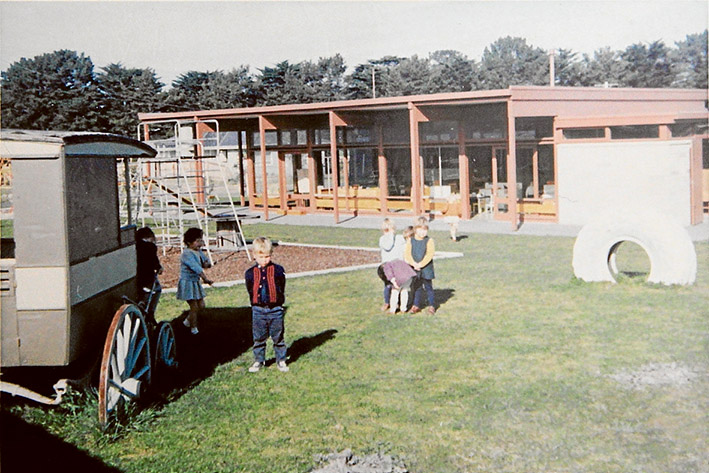 IT was on for young an old on Saturday 28 May when Beleura Hill Preschool celebrated their 50th anniversary. It was a flurry of craft and cake, coffee for the grown-ups, and a cacophony of kids having a great time.

Current families, as well as families whose children attended the pre-school in the past, mixed with past and present educators, reminisced about their time spent at the preschool.

Beleura Hill Preschool, which is located in Amelia Avenue in Mornington, was born of a desire by a number of parents to have a local pre-school in what was, at the time, a newly developing area of Mornington.

Ken Bilham, one of the original committee members that founded the pre-school, attended the celebrations with his wife Wendy whose son, Grant Wharington, was a pupil in the preschool’s first year.

“The area was being sub-divided by the Tallis family,” Mr Bilham said. “We approached George Tallis and asked him if we could buy a block of land to put a preschool on.”

“He said ‘No, a block would be too small’. He then said ‘I’ll give you a block of land, and you can pay half price for a second block’, which was a very generous offer”.

Thus begun a flurry of fundraising, with progressive dinners and various other events being held to raise the funds required to establish the pre-school.

“Many local families worked very hard to get it established,” Mr Bilham said. “There were working bees, with painting and gardening and all sorts of activities. It was a great community effort to get it ready for its 1966 debut.”

The preschool was opened for business at the beginning of that year, and has continued functioning as a preschool ever since.

Beleura Hill Preschool teacher and team leader, Katarina Hills, said the anniversary was a chance to gather past and present families involved in the pre-school and celebrate their success.

“We are a not for profit preschool. Much of what we achieve is through the time and effort of volunteers, so we were lucky to have a number of past presidents and committee members there on the day.”

Kids were kept busy with a wide variety of craft activities, a sausage sizzle, the preschool’s play equipment, as well as a jumping castle.

“I think everybody had a great time, and I think we had about 200 people come along, so it was a great success”.

The afternoon was topped off with a speech by Mornington Peninsula Shire councillor Bev Colomb, whose son attended the preschool.

Jill Gardner, who has been one of the preschool’s educators for 12 years, then cut the cake surrounded by a large group of hungry four year olds.

All preschools are now assessed by the Department of Education and Beleura Hill Preschool are celebrating recently being assessed as exceeding National Quality Standards.

“It is a wonderful achievement,” Mrs Hills said. “One we are truly proud of.”

Beleura Hill Preschool caters for about 75 families each year, in three and four year old kinder.

The preschool has some spaces available for 2017. To make an enquiry or to get more information about programs offered by Beleura Hill Preschool, call 03 5975 3300.

Enrolments are managed by Mornington Peninsula Shire. For further information on Kindergarten Central Registration, contact the shire’s family services team on 5950 1650 or 1300 850 600 or email kindergarten@mornpen.vic.gov.au

Golden anniversary: (clockwise from top left); Jill Gardner cuts the cake; Katarina Hills with Cr Bev Colomb and students Mia and Callum; Heidi, from the Class of 2014, gets stuck into some craft; Steve Dumsday from the Class of 1975, testing out the flying fox; Educators, administrators and committee members of the preschool, The crowd listens to speeches; (bottom left) The class of 1966; and the playground as it was fifty years ago. Pictures: Cameron McCullough