Rye back on track after beating Sorrento 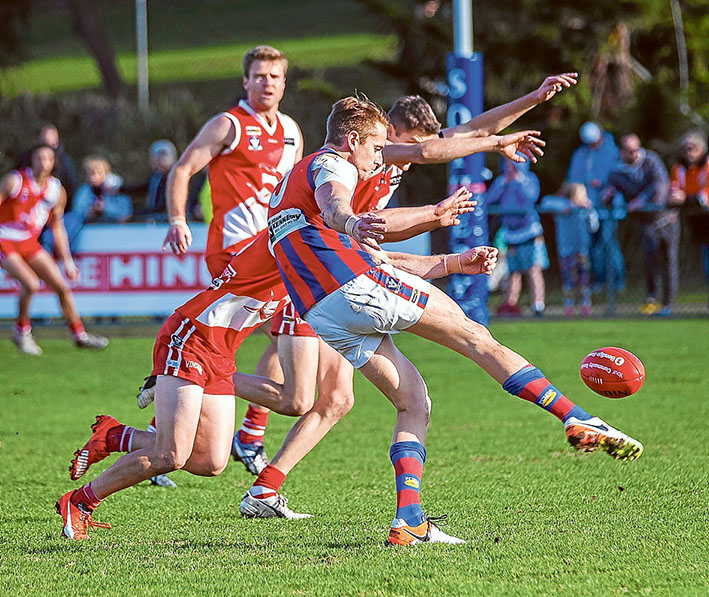 HOW quickly the wheel can turn in our great game.

A fortnight ago, Rye Football Club was on its knees after being thrashed by Frankston Bombers. That loss came on the back of a drubbing against Sorrento and a last quarter capitulation against Red Hill the week before.

Rye was on struggle street.

Fast forward a couple of weeks and the Demons have beaten top of the table Hastings and turned the tables on premiership fancies Sorrento in consecutive weeks.

It was Rye’s first win against Sorrento at Sorrento for more than 10 years.

Wins against Hastings and Sorrento have come on the back of a convincing win against Somerville earlier in the season and a draw against Rosebud in round one.

As Rye coach Josh Moore said following the win against Sorrento on Saturday, “our best is good enough to beat anyone in the competition”.

It was an almost 80 point turnaround from the RPP Match of the Day between these sides less than a month ago.

Nobody can dispute Moore’s claims that the Demons’ best is good enough – clearly it is.

One just wonders where the effort and application of the past two weeks was for the few weeks prior.

Surely it didn’t take an article questioning the club in the The News three weeks ago to kick start the Rye season? Surely it couldn’t have been as simple as that.

On Saturday, the Rye win came on the back of some new faces in the team.

There was no question that the players in the team three weeks ago weren’t getting the job done.

First gamer Luke Davies-Uniacke booted three goals for the winners and was one of the keys in the victory.

Nick Baron, who plays predominantly in the twos, was important in the win. While Nathan Henley and Ryan Mullett rarely put in a bad performance.

James Appleford has been in some good form of late and together with Jimmy Jennings, they were catalysts in the victory.

Dean Millhouse also hit the scoreboard with a couple of majors, which is what the Demons have lacked – support for Matthew Greig.

Sorrento went into the game without key players Scott Lockwood and Leigh Treeby.

The youngsters who dominated a few weeks back weren’t as up and about, although Josh Brigden again successfully carried out the job on Greig.

Nick Corp played a lone hand in attack with a couple of goals but there were no more multiple contributors.

Luke Tapscott worked hard and Ryan Potter and Tyrren head both had strong performances, while Joey Boase has settled into senior footy nicely for the Sharks.