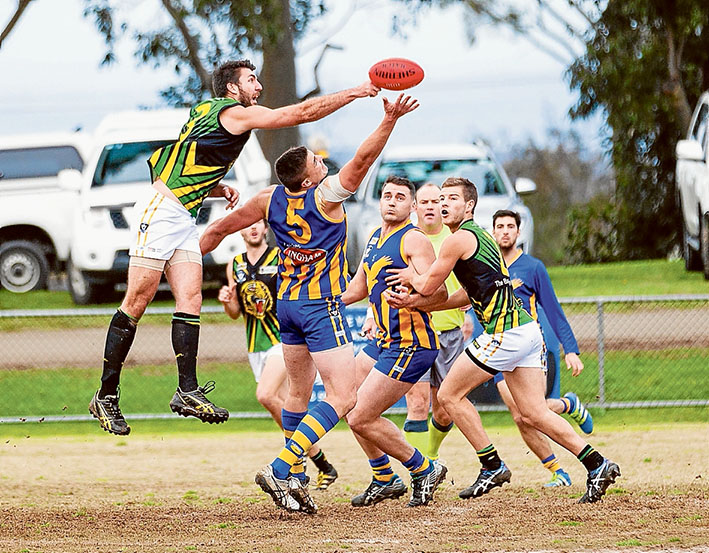 FRANKSTON Bombers are absolute genuine contenders for the 2016 Nepean League premiership after comfortably disposing of Rosebud at Greg Beck Oval on Saturday.

“Going hard enough for long enough” was the theme of the game for the Bombers after yours truly questioned whether they had the mental toughness to play out 100 minutes of football.

The Bombers answered that question in spades. Rosebud tried on a number of occasions to unsettle the Bombers, however the home team stuck to the task at hand and extended their lead at every change.

What was more impressive for Frankston Bombers was that they recorded their 9.10 (64) to 4.7 (31) win on the back of quiet performances by Sam Fox and Dale Sutton.

While Rosebud’s Seb Kremich and Jack Jarman did outstanding jobs on the Bombers’ guns, the likes of Brett Sutton, Jason Kingsbury, Josh Francis and Alan Williams got to work for the winners.

Greg Bentley was clearly Rosebud’s best player, while Nick Boswell, while he didn’t dominate like he can, was still in their best two players.

The forward half of Rosebud was thrashed. Keegan Downie, Ben Shultz and coach Michael Kraska didn’t get near it all day.

Ryan Marks-Logan was the best player on the ground, Jarryd Amalfi dominated, as did Beau Muston, and Jay Page and Zac White comfortably won their positions.

Amalfi, Marks-Logan and Muston constantly ran off their opponents and set up forward thrusts through the middle of the ground.

Corey Micari was outstanding yet again for the Bombers and had the honours over premiership ruckman Ben Dwyer. Micari’s development over the past two weeks has been significant.

Frankston’s performance was superb, no question, however we’ve still got to keep things in perspective – it was the Bombers’ first win over a top five side.

It is a very different side to the one that lost to Hastings and Somerville and will only get stronger this weekend against Sorrento at Sorrento.

Ruckman Ryan Kitchen will come back into the side, while they have recruited former St Paul’s key forward Luke James, described as “a bull” who has booted 400 goals in his past five seasons. He was ranked by pundits as the number one player in Southern League in 2013.

Sorrento has lost its past two games after being beaten by Devon Meadows at David McFarlane Reserve.

The Meadows opened up a five point lead at quarter time and extended their margin at every change, before Sorrento charged home in the final term to go down 13.12 (90) to 12.16 (88).

Sorrento pulled a shock selection at the table on Thursday night, bringing-in Tom Langford, who is on Richmond’s VFL list and is part of the famous Langford family.

It was out of character for coach Nick Jewell to rush any player into his team and from all reports, the inclusion of Langford was frowned upon by some who had been in good form in the reserves.

The move backfired. The Sharks have the toughest draw of all sides in the final six weeks with matches against Frankston, Somerville, Dromana, Hastings, Rosebud and Red Hill.

Nick Corp was outstanding for the Sharks with six goals. Myles Pitt, who the Sharks were hoping to get back for the second half of the season, has reportedly reinjured his back and will miss the remainder of the season.

In a week where forward Jackson Dalton walked out on the club, Harry Larwill booted seven majors for the Hillmen while Jake Mold and Steve Marchetti dominated through the middle of the ground.

In further good news for the Hillmen, Jarred Eames dominated in the reserves and looks in great shape, while Sean Holmes and Ben Macguiness were also in the twos.

Troy Jacobson and Alex Harnett were the best of the Panthers.

The Magpies led by two points at quarter time, three at half time and seven at the last change, before Rye booted 2.9 to two goals in the last quarter.

Ryan Mullett and Kris Bardon were again outstanding for the Demons while Ryan Taylor and Jimmy Jennings were superb down back.

Dromana maintained its tag as the giant killers after thrashing Somerville by more than six goals.

The Tigers dominated with teenager Ethan Johnstone kicking five goals and Rikki Johnstone and Beau Cosson three each. Down back Christian Ongarello and Dean Waugh were superb.

Somerville is in a world of pain right now. The word on the street is that it’s not a happy place.

The Eagles are also looking for some off field assistance. Saturday’s performance wouldn’t have helped that cause.

Right now, the Eagles have no chance  of holding up the silverware.

Col McVeigh was the best player on the ground with seven goals, while Dale Alanis and Luke Hewitt booted six goals each.

Luke Clark and Josh Mulheron were also back in the side, giving the Blues arguably their best side on paper for the season.

Chris Harris and Sean Miller were the best of the Yabbies.