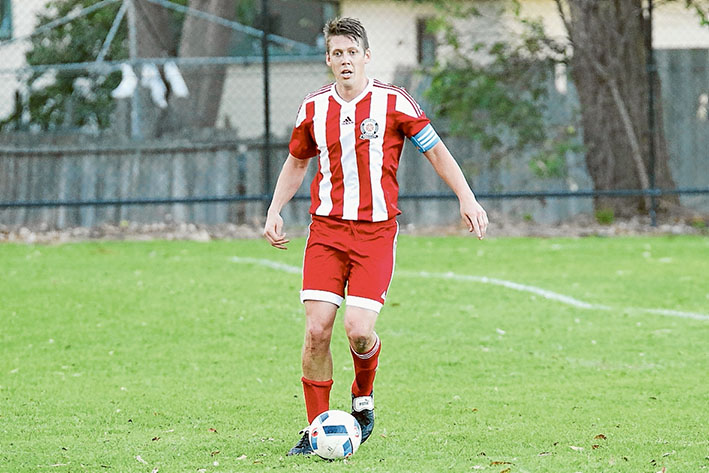 IT’S official. Rosebud Heart now sits proudly on top of State 5 South and is hot favourite to take out its first ever championship in just its second year of competition.

For the past few weeks Scott Morrison’s men have been the only side in the league with a perfect record but playing less games than arch rival Baxter forced Heart to wait before claiming top-dog status.

Saturday’s 3-1 away win over Chelsea did the trick (as Baxter had a bye) with master predator Dave Greening scoring twice and setting up Luca Biancardi in the 87th minute for a first-time volley that settled the issue.

It was 0-0 at half-time but when Greening was hauled down by Connor Lewis in the 55th minute he recovered and converted the resulting penalty. Lewis was sent off after receiving a second yellow card in the incident.

Greening then broke clear in the 60th minute, dummied the Chelsea keeper then smashed the ball inside the near post to make it 2-0.

Chelsea’s sole reply came from the spot in the 70th minute and was converted by Dejan Dimitrovici after veteran Heart midfielder Adam Poole was judged to have infringed inside the area.

Clifton Hill import Chris Davies opened the scoring in the 12th minute but two minutes later Chris Reid tapped in from a Sammy Stewart cutback to make it 1-1.

Davies grabbed a second in the 30th minute but four minutes after the break Tervit brought down an opponent and Davies notched his hat-trick from the penalty spot.

Davies got his fourth in the 60th minute and goals from Michael Catalano (80th) and Daniel Thomas (89th) rounded off the rout.

Frankston Pines slumped to a 4-0 defeat at the hands of Langwarrin in Saturday’s State 1 South-East derby at Monterey Reserve.

The home team featured former Langy stalwart Ben Caffrey but the visiting outfit hit the front in the 33rd minute when captain and central defensive powerhouse Alex Van Heerwarden could barely believe his luck after going forward to contest a set piece and ending up unmarked at the back post for a simple tap-in.

A well-timed Stefan Soler volley in the 37th minute was parried by Langy keeper Robbie Acs and two minutes later a stunning free kick on the right by Caleb Nicholes saw the ball nestle in the top far corner to make it 2-0.

The game was put out of Pines’ reach in the 65th minute when Nick Lekakis failed to head clear and Koray Suat rounded advancing Pines keeper James Laminski then struck the ball into the unguarded goal.

A second yellow card for Pines left back Luke Murray in the 72nd minute ended his involvement and Nicholes completed the scoreline in the 83rd minute with a point blank strike at the near post following a surging run into the area and cutback by former Pines star Grant Lane.

Peninsula Strikers returned to winning ways in State 2 South-East with a resounding 4-1 home win over visitor Heatherton United on Saturday.

Matt Morris-Thomas opened the scoring with a superb solo effort in the 20th minute jinking past three opponents before sending an unstoppable strike into the top far corner.

Morris-Thomas was felled inside the area in the 35th minute and made no mistake from the spot and two goals in the first 20 minutes of the second stanza sealed Heatherton’s fate.

Recent signing from Mornington, Tom Mathews, made it 3-0 after Heatherton’s keeper could only get one hand to Alex Hopson’s back post header presenting Mathews with a tap-in and not long after Hopson put Ben Meiklem through and he slotted the ball under the advancing keeper.

Seaford United and North Caulfield fought out a spirited 3-3 draw in their State 2 South-East battle at Caulfield Park on Sunday.

Paul McGuire was back in the Seaford side having returned from Sandringham and scored from the penalty spot in the 30th minute after Dylan Waugh had been brought down.

Aaron Cohen of North Caulfield received a second caution and was sent off shortly after and another Sandy recruit, Nick Ormond, lobbed the ball home from distance to make it 2-0 in the 37th minute.

Caulfield hit back through prolific scorer Oran Harel just before half-time to make it 2-1.

A second goal from Ormond restored the two-goal cushion in the second half but Harel made it 3-2 from the penalty spot.

After a long stoppage due to a head clash, the 10 men of Caulfield were pushing hard when a long ball into the six-yard box saw a Seaford defender get the final touch for an own goal to complete the scoreline.

It was a return to form for Skye United on Saturday as Billy Armour’s side defeated Bayside Argonauts 4-1 at Skye Recreation Reserve.

Nick Theodore tapped in his side’s first on seven minutes before doubling the lead soon after as his strike defected off the post into the Argonauts’ keeper before finding the net.

Bayside’s Neal Byrne then pulled one back before the break as Skye United’s defence was opened up on the counter.

However Skye’s talismanic striker Daniel Attard made it 3-1 on the hour mark, converting Alex Roberts’ cross.