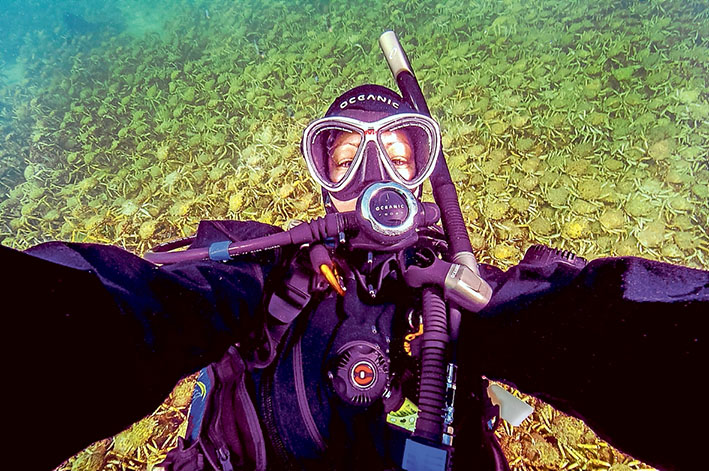 FORGET the epic aggregations of wildebeest you’ve seen on documentaries, the Mornington Peninsula has something far more spectacular on its front doorstep.

To see it, you’ll need to ditch the binoculars and grab a mask, snorkel and wetsuit because it’s in the waters of Port Phillip. Around this time every year as the waters cool, hundreds of thousands of giant spider crabs make their way up onto the sandy shallows along the southern shores of the bay. As the name suggests these crabs are impressive in size, with a body measuring over 17cm and long legs that stretch up to 70cm.

The result is an orange army of crabs that blanket the shallows, which can stretch for hundreds of metres and crabs can be 10 deep. Scientists believe this aggregation is a case of safety in numbers.

Like their crustacean relatives, giant spider crabs need to shed their hard protective shell to grow.

During this time their body is soft and they are vulnerable to the mouths of hungry hunters such as rays, seals and even birds.

Getting together in such huge numbers to moult reduces the chance of being eaten.

Surprisingly, there has been little research conducted on this natural phenomenon, although an active community of citizen scientists are doing a great job of documenting their movements.

It’s a sight that needs to be seen to be believed. The bonus is, anyone can. Where? Around the southern end of Port Phillip. The crabs are still on the move and you can keep updated on the Spider Crabs Melbourne Facebook page, which has regular reports of their whereabouts and the best time to safely see them.

Although they’re harmless, it is not recommended to pick up the crabs.