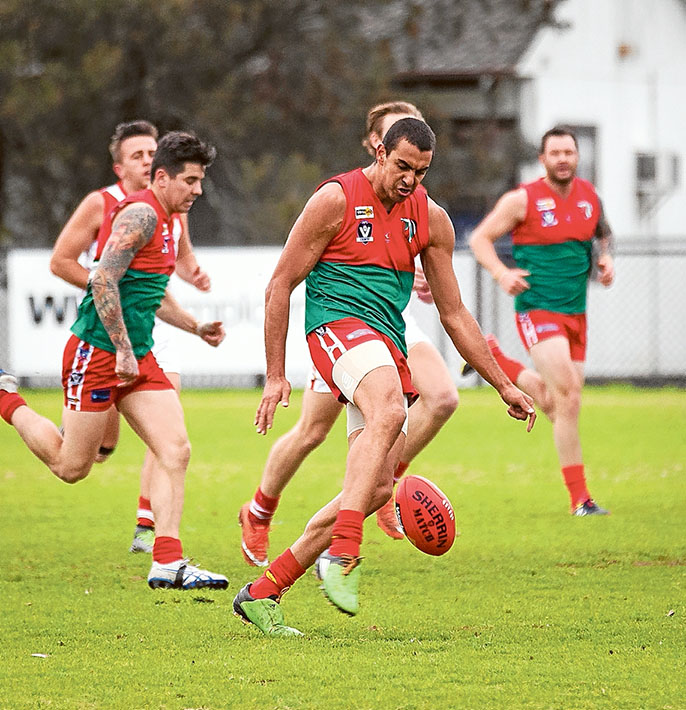 While all the talk surrounds Frankston YCW and who is going to challenge, the Sharks are emerging as a team that seems to be getting things together at the right time.

Bonbeach has now won six of its past seven matches after losing the opening four games of the season.

In the corresponding game in Round three, Bonbeach lost to Seaford by 11 points. That’s a 43 point turnaround in two months of footy – that is significant.

At the time of going down to YCW by 114 points in Round four and then beating Mt Eliza to open its account the following week, Bonbeach coach Steve Hughes said “perhaps we need YC to kick start us every year”.

Kick start the Sharks they have with key players in Shane McDonald and Dylan Jones having a significant impact on games.

Jones dominated in the middle on Saturday and McDonald was at his sensational best, booting five goals.

Luke Damon is up and running now and having a big impact on the playing ground and results. He booted three majors on Saturday.

Matt Douglas was superb again in his seventh game for the season and Jacob Flannery is stringing some good footy together also for the Sharks – that’s where the improvement is coming from, the form of the ‘lesser-likes’ without reputations.

The Tigers were right in it at half time and three quarter time, trailing by just 10 and 14 points respectively.

The Sharks kicked five goals to two in the last. Brad Doyle and Liam Davenport were outstanding for the Tigers while Aaron Walton kicked three goals.

Frankston YCW was held goalless and trailed Langwarrin at quarter time by 14 points.

Kangas coach Brad Dredge said on the RPP Footy Show on Saturday morning that the mantra of his side was that they were “hard to play against”.

It’s certainly a reputation that the Kangas have among other coaches and they made life difficult for the Stonecats again on Saturday.

Anthony Bruhn and Craig Nankervis were superb for the winners while Andrew Withers and Josh Biggs were the best of the blue and white.

Karingal was able to offer some resistance in the second half, outscoring the Pythons five goals to three.

Tim Bongetti was magnificent again for the Pythons with three majors while Luke Potts, Aaron Edwards and Beau Hendry combined in the middle and around the ground to be three of the best players on the park.

Key defender Jack Fisher claimed yet another scalp on Saturday, restricting Leigh Poholke to one goal. Chris Hay booted three for the Bulls and Darcy Hope was solid in his first senior outing.

The Redlegs booted the first four goals of the match and by half time had opened up a 10 goal break after booting nine majors in the second.

Nathan Ryan, James Hammond and Jordan Capkin all got among the goals as the Redlegs flexed their muscle for the first time this season.

In the other Sunday game, Edithvale-Aspendale shook off a persistent Chelsea to win by almost four goals.