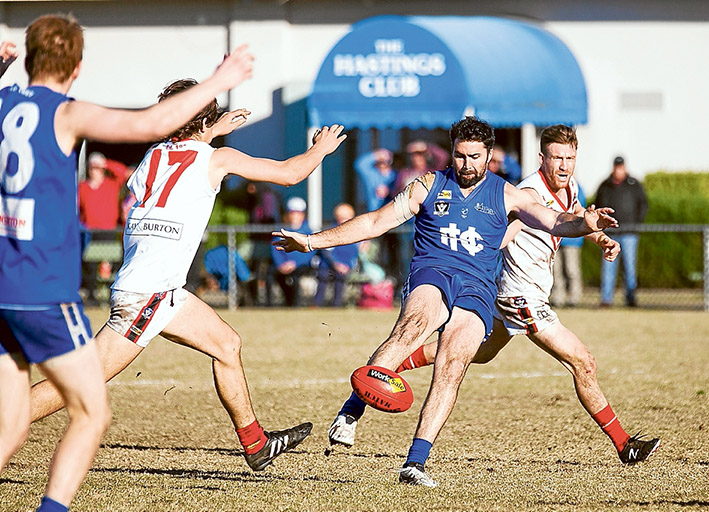 But unfortunately not all sides did not come away with a win on Saturday.

The club came up against very determined Red Hill sides which was very disappointing but the that’s sport. We now have next week to get ready for.

Next week also looms as another huge test with the club heading to Rosebud Football/Netball Club in what shapes as a season defining game for our senior footballers.

They played some scintillating football in the first quarter on Saturday which saw them break out to a six goal advantage at the break but after quarter time the boys fell away to lose by a four goal margin.

The players must now refocus and prepare for Saturday’s contest which I know they will.

Our netballers had a terrific result on the weekend but unfortunately didn’t come away with a win but are showing much improvement with our B – Grade girls going down by the slightest of margins (two goals), our C – Grade girls really fought their game out, but couldn’t get across the line.

On Saturday the club held its annual ladies day luncheon which was wonderfully attended with approximately 80 ladies.

They all enjoyed the fine food; it certainly was a great day for the girls and we certainly hope they enjoyed themselves.

In a game that meant so much we got off to a good start, then after the quarter time break it was all downhill from there.

We looked great when we were on top of the game but once challenged we looked unwilling to knuckle down and put in the hard yards defensively.

Now with a tough run home we are back with the pack and we will see how we will respond after such a disappointing loss.

The boggy conditions suited our game style. We came flying out of the blocks with big Joel Standfield coming back from injury kicking two goals in five minutes.

But as good sides do, Red Hill came back strongly and even though we competed well they were too strong and broke us open in the second half.

Some boys had great games but unfortunately we didn’t have enough contributors on the day.

Hopefully we can turn it around on the track in time for Rosebud.

This week would prove to be a big test for us against top of table Red Hill.

Unfortunately for us we had four players pull out with illness or injury before the game leaving us with 18.

The boys got off to a great start winning the opening bounce and gaining a forward fifty entry early.

As the quarter progressed the boys continued to apply intense tackling pressure which caused turnovers.

Kaylen Jansen was giving us plenty of run out wide while Micheal Tanner and Fraser Rendall were marshalling the defence.

Luke Mcveigh worked tirelessly in the centre giving two or three repeated efforts all day. Kayne Lewis made winning the hard ball look easy and consistently hit up targets at both ends of the ground.

Lachie Gibbs moved forward and proved to be be a target, kicking two great goals.

The boys were exhausted in the last not having had a rotation all day and Red Hill ran away with the game after being held for three quarters.

A fantastic team effort that showed we can match it with best and hold fast moving teams with that Hastings brand of hardness and resolve.

Tori Camerli had her best game for the year, intercepting and finished off with strong passing in attack.

B grade started off strong keeping even with Red Hill in the game.

Too many errors throughout the match cost us on the board in areas where we just need to play our own game and value our possession of the ball.

We had a final charge in the last quater; unfortunately not enough to get in front causing a close loss by two goals.

The girls however showed that the fighting spirit is there and if we keep building on the desire to run out matches and chase the win then our game will continue to improve.

Ladies Day that followed was a huge success raising money for our electric score board. Thanks to Emma Smith for organizing such a great day.

This Saturday night 16th July from 7pm. Band playing, Be my Booth, plus raffles. Cost $10 single or $15 double Fundraiser for Carly Jackson “Get your wig on”. Carly is suffering a rare form of cancer, on all proceeds from the evening will go towards Carly and her three boys.