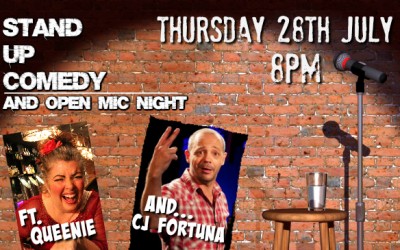 “Smart, energetic and surprising!” The Age

With five Melbourne International Comedy Festival shows under his belt, including a Moosehead Award in 2000 for his comedy musical Rockothello, CJ has firmly entrenched himself in the Australian comedy scene.

CJ made his television debut in 1997 playing a nerdy ventriloquist on Neighbours. Since then he has worked on a variety of short films, TV commercials regular guest roles on Blue Heelers and Stingers most recently writing and performing on channel seven’s Hamish and Andy.

In Melbourne, his dry wit has featured on local commercial radio stations including Nova breakfast with Hughsie, Kate and Dave. CJ is also the 2006 winner for The Comedy Channel Short Film Festival with his film “Jonathan Livingston C.E.O.

One half of the glamorous duo Ron and Queenie Kent (of “Some say we Can, We say we Kent” circa 1950’s) Queenie is a showgirl, she may or may not have worked in the following places:

Queenie tells it like it is and often with more information than is necessary – in her own words, she’s an “Over Sharer”.  She’ll sing, dance and give advice, whether you want her to or not!!