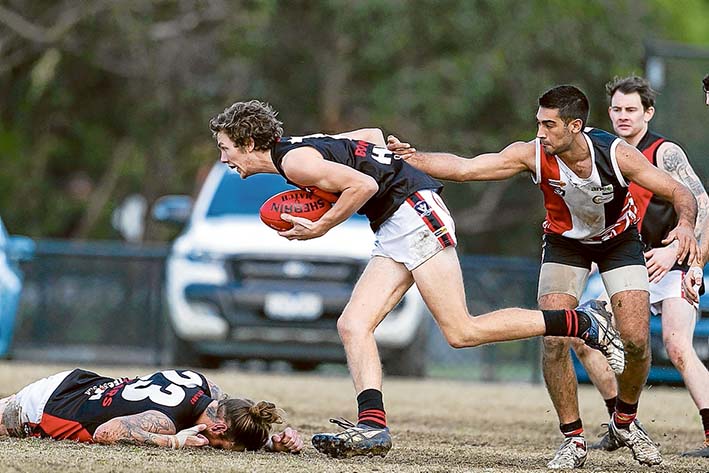 RYE’S season is over.

The Demons are now a game and a half outside of the MPNFL Nepean Division top five, as well as a whopping 31 per cent after being humiliated by Rosebud by more than 100 points on Saturday.

After a mid-season slump that saw them look right out of contention, Rye responded to public criticism and got themselves back into the finals hunt.

However, a loss last week against an emotionally-charged Devon Meadows and then a 102 point belting on Saturday has ended their season.

This is the second season in succession that the Demons have missed out on finals action.

Their opponent on Saturday, Rosebud, has sounded a very clear warning that it is well and truly on track to defend its title.

The Buds are in outright second place on the ladder with 38 points, while Somerville, Hastings and Red Hill are all on 36 points.

Frankston has gone half a game clear at the top of the ladder after a convincing win over Devon Meadows.

Rye v Rosebud was billed as the match of the round – it was an absolute fizzer.

The Buds kicked with the wind in the opening term and booted the opening two goals of the game. Nathan Henley then responded with two of his four goals for Rye and at the halfway mark of the first term things were all square.

That’s when the avalanche started. The Buds booted the next nine goals and went into the halfway mark more than 10 goals in front.

Rosebud had 13 different goal kickers with Dale Stephens playing his best game and booting three goals, along with Tommy Stoffels.

Keegan Downie was superb but didn’t kick a goal, such was the dominance of his teammates, including his little brother Sean who starred.

It would be unfair on Rosebud to say that Rye was poor, although that would be true.

Rosebud was a force, starting its run from half back, dominating through the middle and pushing hard into attack to create opportunities.

The Buds have beaten Somerville, Hastings and Red Hill and just went down to Sorrento at Sorrento. They were poor against Frankston but didn’t get hammered. Rosebud is a genuine contender.

You could mount a case that Sorrento is gone too after going down to Hastings by 18 points.

The Sharks are now a game outside of the top five and have lost three of their past five matches (Devon Meadows, Somerville and Hastings).

The Sharks have just two more matches remaining for the season, taking on Rosebud at Rosebud and Red Hill at Red Hill. They were lucky to beat the Buds by a point in round five and got the job done by 28 points against Red Hill in round seven.

On Saturday, the Sharks just weren’t as desperate as Hastings to win the hard ball and at times looked scared to get their hands dirty in the 6.14 (50) to 4.8 (32) loss.

Paul Rogasch was absolutely outstanding for the Blues, while the midfielders, Mark Devereaux, Nathan Gray, Pete Mawson, Dale Alanis, and Josh Mulheron in the ruck carved up their opposition.

The Blues were great in the first half and in the second quarter, 85 per cent of the play was in Hastings’ forward half.

Leigh Treeby worked hard for the Sharks, as did Tyrren Head, while Scott Lockwood worked hard leading up at the footy.

Red Hill again looks vulnerable after going down to Dromana in a three-point nail biter.

When the teams met earlier in the season, Red Hill won with the last kick of the day.

Frankston Bombers set up their win against Devon Meadows with a four-goal to zip second quarter and eventually ran out 12.16 (88) to 6.8 (44) winners.

The Meadows had an emotionally-charged couple of weeks after the passing of Beau Miller, who’s funeral was last Friday. Coach Glenn Michie (finger) and star midfielder Stevey Roberts (third ACL) also hung up the boots through the week.

The Bombers were apprehensive but got the job done. New forward recruit Luke James was reported.

The Panthers trailed by 14 points at half time before booting six goals to one after the major break.

In the final game, Tyabb was restricted to just one goal for the second week in succession, this time by Somerville, who booted 15.18 (108).