Failure of pier being ‘assessed’ 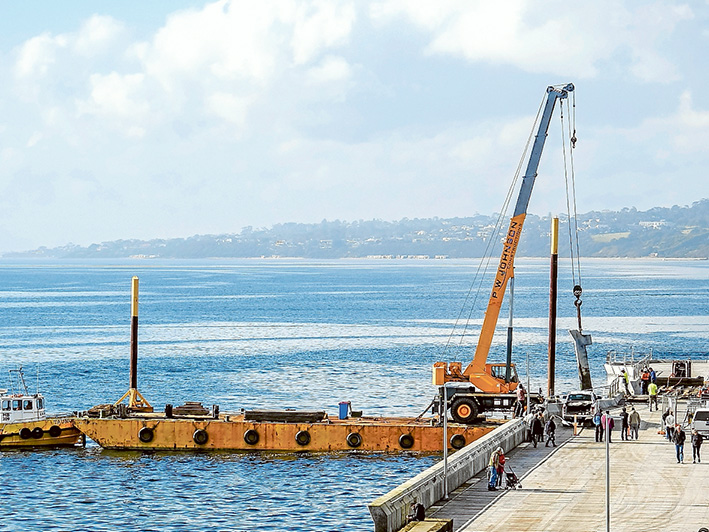 PARKS Victoria says it has “full confidence in the structural integrity and longevity of Mornington pier” despite losing nine wave screen panels, top deck planking, handrails and a seat in a storm two weeks ago.

The 15 tonne concrete panels were torn from the pier during the Tuesday 12 July storm when 60 knot winds were recorded.

Port Phillip and Westernport chief ranger Reece Taranto said damage was restricted to the wave panels attached to the $18 million pier – not the structure itself.

He said a marine contractor made an early morning assessment the day after the storm and arranged for a barge and crane to be floated in to lift the panels out.

Divers working down below in a “weather window” on Wednesday and Thursday last week hitched the damaged panels to a crane which hoisted them onto semi-trailers to be taken to a Mornington warehouse to be assessed.

“The outer section of the pier is now closed, but members of the public can access the inner section, including the lower landing, as these areas were not damaged, “Mr Taranto said.

“Once the pier has been properly assessed, we will reopen the areas that are safe to use.

“But, until marine engineers have had a chance to assess the damage and determine the best approach to repairs, it will be difficult to put a timeframe on when repairs will be completed.”

Mr Taranto said marine engineers were determining the best approach to strengthening the panels’ structure before the next big blow.

The pier has wave screens on both sides to protect the harbour from storms that have damaged or destroyed moored boats several times since the 1980s.

Despite the high cost of the pier works, the harbour still remains unprotected from storms coming from the north to northeast.

Successive state governments, through Parks Victoria, have spent about $18.5 million on Mornington pier since 2010. The Labor government spent $3.5 million on the middle, 53-metre section in 2010-11.

Repairs to the outer section – closed in August 2010 after a series of storms damaged pylons and dislodged top deck planks – remained unfunded.

In June 2011, The News reported the outer section was in danger of collapsing after engineers found 20 per cent of the old pylons had failed or were about to fail and were not supporting the top deck. About half of the others were in “average condition” and the outer section was “one big storm away” from becoming irreparably damaged.

In May 2012 the Liberal government announced it would spend up to $15 million to replace the outer section. This was the lion’s share of $23 million in local port infrastructure upgrades that year with Mornington MP David Morris garnering plaudits for his lobbying efforts.

Work to replace the outer section started in early 2014 and was supposed to be finished in time for Christmas, but was delayed due to a combination of bad weather (three big storms) and technical problems.

These included reattaching the concrete wave screens using a different, stronger system by divers who could not work in rough weather.

Heavy lifting: Contractors are dwarfed by the concrete panels ripped from Mornington pier during a storm two weeks ago. The panels were secured to the pier structure by bolts which appear to have been pulled loose during the battering by waves. Pictures: Keith Platt