Happy birthday, for the 100th time 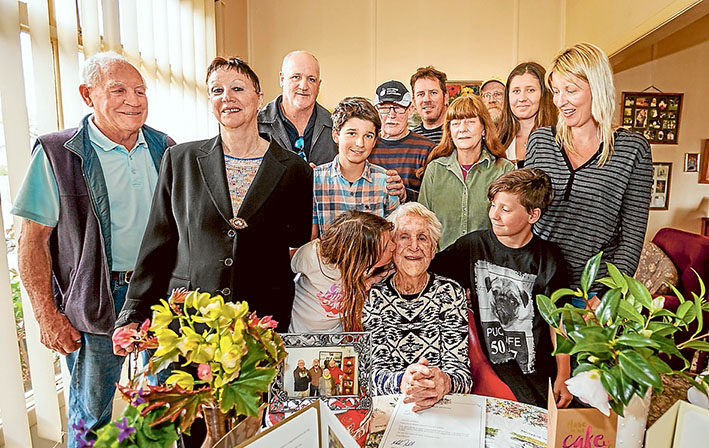 ROSEBUD resident Thelma Appleford celebrated her 100th birthday with her sons, daughter, grandsons, granddaughter and great grandchildren on Saturday 23 July. Also there to celebrate were her nephews, great-nephews, cousins and neighbours.

Born Thelma Jean Brown on 23 July 1916, Mrs Appleford grew up and married in the Coburg area. She experienced the tough times of the Great Depression when she and husband Edwin lived in Greensborough.

In January 1939 she recalls standing in a grassy paddock holding her little son Don’s hand with the Black Friday bushfires raging all around them. The fire stopped at her feet.

Mrs Appleford began visiting Rye in the 1930s with Edwin’s family, who had been holidaying there since the early 1900s – usually camping after arriving on the paddle steamer Weeroona.

In the early 1940s she and Edwin and four children moved to Rye, building their second house in Marshall St when the area was still a frog pond. There was no electricity and they used kerosene lamps for light and a wood fire for cooking. There was no gas, only bore water and, because of Rye’s small population, they felt like pioneers.

Mrs Appleford’s fifth child was born at the old Dromana hospital. The children attended Rye State School in the 1940s-50s when it was a small red brick building between the two churches. Other buildings were the old Mechanics Hall and ice works, as ice was the only means of cooling, apart from the Coolgardie safe.

In the 1950s the Applefords were involved in building the Rye Scout Hall on the foreshore near the pier. Edwin painted the mural of the Australian flag on the ceiling, which was only recently painted over.

Mrs Appleford has three remaining sons and a daughter who have all been active in sport on the peninsula. Four sons played football for Rye with Nick, wearing the number 17 jumper, active in developing the club where he was president for many years. Don, Nick and Gary all played for Rye in the 1959 premiership, with Don going on to play in four flags. As a boxer, Gary won the Australian Welterweight title in 1969 as Gary Ford.

Daughter Jeannette played for the Rye basket ball team in the 1950s and grandson Sean, a life member of the Rye Football Club, played a record 461 games also wearing No 17. Great-grandson James plays for Rye and her younger great-grandchildren Sam, Stella and Nick, play for Rye Juniors. All four great-grandchildren wear No 17 made famous by grandfather Nick.

Mrs Appleford – whose life has spanned most of the 20th century and part of the 21st century – remembers women dancing with broom sticks at the announcement of the end of World War I; being a 24-year-old wife caring for her 18-year-old brother-in-law who returned from New Guinea in WWII with malaria after being wounded on the Kokoda trail; and sitting on the beach one night in May 1952 watching the lights of the P&O passenger liner Orcades grounded in the bay near Rosebud.

As well as Black Friday 1939 she remembers the peninsula bushfires in the 1930s when residents sheltered on the beach; watching her sons play footy against Rosebud on the foreshore near Rosebud pier, and walking from Rye to the old Rosebud cinema (Broadway Theatre) when it was on Point Nepean Rd.

Mrs Appleford lives independently in McDowell St, Rosebud, and enjoys cooking for herself and her family. She has strong political opinions and a strong social conscience. She has made her views known to local politicians and feels strongly that it is wrong for homeless people to have to sleep on the streets.

She has always loved cinema and enjoys stories about good people, who do good things. She loves reading and is good at crosswords. In her younger days she travelled to Europe and the United States. She is a Rye and Carlton football supporter.