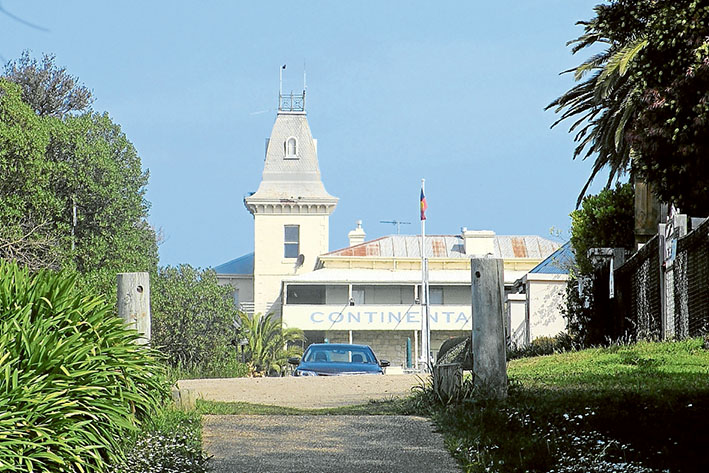 CONTINENTAL Hotel developer Julian Gerner says Mornington Peninsula Shire’s approval of his development application gives him “something tangible to show financiers” in the lead-up to starting the $50 million project.

“I am pleased that the overall scheme has been endorsed,” he said.

“I am excited, but there’s an awful lot of work to do – much of it well advanced.”

The council at last week’s meeting backed an application by Mr Gerner’s Continental Development company for extensive alterations and additions to the historic hotel. This paves the way for the creation of 24 new hotel rooms, four-storey above-ground building with 16 units, communal rooftop area, wellness centre with gym, cafe, change rooms, offices and terrace with lap pool.

A two level basement car park will have 58 spaces and a public car park with 25 car spaces on land at 23 Constitution Hill Rd which the shire will sell to Mr Gerner for $1.8 million plus GST.

The developer said he was “on my own” in the project which – as one of the conditions in the development approval states – must be completed within six years. Other conditions provide for a further 20 car parking bays within a seven-minute walk of the site, or making an additional level of public car parking within the development. The shire’s property strategy team leader Jim Houlahan told council the sale of the car park land to Mr Gerner has the “potential to contribute to a better planning outcome for the reinvigoration of the adjoining heritage hotel and enabling it to continue to operate as an operating hotel rather than conversion to alternative uses including apartments”.

It had been expected that Heritage Victoria would need to “sign off” on the Continental Hotel’s redevelopment application before approval could be given by the shire. This does not appear to have been the case.

Heritage Victoria has previously described the hotel as being of architectural significance to the state as a relatively intact example of the type of hotel development popular in the later years of the 19th century providing accommodation, entertainment and associated hotel services for wealthy city tourists.

“The hotel, constructed of local limestone, is important as a landmark building for the seaside town of Sorrento as it is situated on a prominent site at the entry to the town,” Heritage Victoria has said.

Mr Hindley said the height and bulk of the proposed rear four-storey building with 16 apartments, communal rooftop area, wellness centre and rooftop gardens, would deprive the hotel of its landmark status as intended by Founder-of-Sorrento George Coppin.

“The council only saw the landmark as being a feature of the Main St, yet it is a landmark for the whole district,” he said.

“Coppin designed the building and tower to be a landmark, but it’s to be completely overshadowed by a building of excessive height and bulk.”

The historical society says the new building’s height should not exceed the eaves of the old hotel, leaving the tower and mansard as the landmarks they were intended to be for the whole district.

“The skyline will be obstructed and ruined,” Mr Hindley said.

“The people who live and work there are keenly aware of the mass and bulk of the proposed building, but they look to the council to interpret that for residents.”

Nepean Conservation Group president Dr Ursula de Jong said the apartment block would be visible from the bay and back beaches of Sorrento.

“It will dominate the skyline and detrimentally impact on the iconic hotel,” she said.

“The huge bulk of the proposed development is entirely out of place in the historic coastal village of Sorrento.

“The council would not have given approval if it had been proposed for Mornington – yet that’s a full-scale town.

“And we are appalled that the shire chose not to comment on the hotel’s heritage values: they have abrogated their responsibilities on heritage.”

An auditor will be appointed to review the shire administrative processes in the aftermath of the sale of Continental Hotel’s rear car park to Mr Gerner.

The council last week agreed to the audit among conditions for the hotel’s redevelopment.

The audit aims to “provide both council and the community with a greater level of probity and transparency and, when completed, such report to become a public document”.