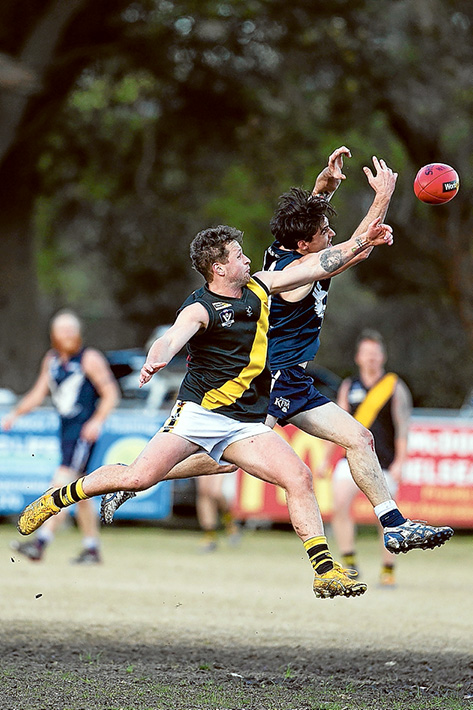 PINES coach Pat Swayne will invite South Umpires Association boss Mark Mounsey to the club this week to explain some rules to his charges after he was left frustrated and bewildered after his side went down to Mornington by 17 points in MPNFL Peninsula Division on Saturday.

Swayne said that in his 18 years in senior football, never has he used poor umpiring as an excuse to his players.

Things changed on Saturday, Swayne conceding that he could “legitimately” use the umpires as an excuse in their loss to the Doggies.

“We were bad at times, however, our good was never going to be good enough given we had five free kicks to 21, a send off that wasn’t there and 50m penalties against us for reacting to poor behaviour from the umpire,” Swayne said.

“Our supporters got caught up in the frustration but umpires are expected to be professional and ignore that.

“We’ll get Mounsey or Genty (Brett Gent) down to talk to the boys but what we saw today was almost laughable,” Swayne said.

This latest criticism from a very level-headed, respectful, intelligent senior coach follows an overruled goal that should never have been overruled in a Nepean game three weeks and a report that was thrown out at the tribunal a week later in a Peninsula game.

Players also reported ‘taunting’ from certain umpires. This was evident again at Pines on Saturday with one umpire allegedly gesturing to the crowd, a claim made by a 14-year-old female spectator.

In a time when the league is in desperate need of umpires and bringing through new talent, the existing crew should be seen and not heard – ever, unless making or explaining a decision.

Mark Mounsey recently made contact with me and explained that attracting new talent was difficult and that umpires being “seen and not heard” was the mantra of the SUA.

Unfortunately, not everyone is on that bus and unless action is taken swiftly, recruiting the next generation of umpires is going to be made difficult.

The Eagles had their chances, booting 6.1 to three goals straight in the last.

Jackson Mockett booted four for the winners while Matt Herbert was outstanding.

Will Flavelle was the best of the Eagles with two goals.

Seaford is now just two points (plus 10 per cent) behind Edithvale on the ladder.

The Tigers play Karingal and Mt Eliza in their remaining games. They played their Round 17 game against Pines at Easter.

Edithvale plays Mornington, Karingal and Frankston YCW in their final three matches and needs only to win one to make it.

Frankston YCW led Karingal by eight points at half time before kicking 10.9 to 2.2 in the second half. The Stonecats had 10 goal kickers with Paul Minchington named best player on the ground.

The Sharks, four points and percentage behind Pines in third, play Mt Eliza, Frankston YCW and Langwarrin in their remaining games.

Pines faces three straight defeats against YCW this week before having a bye and finishing with Chelsea. The Pythons will still finish third.