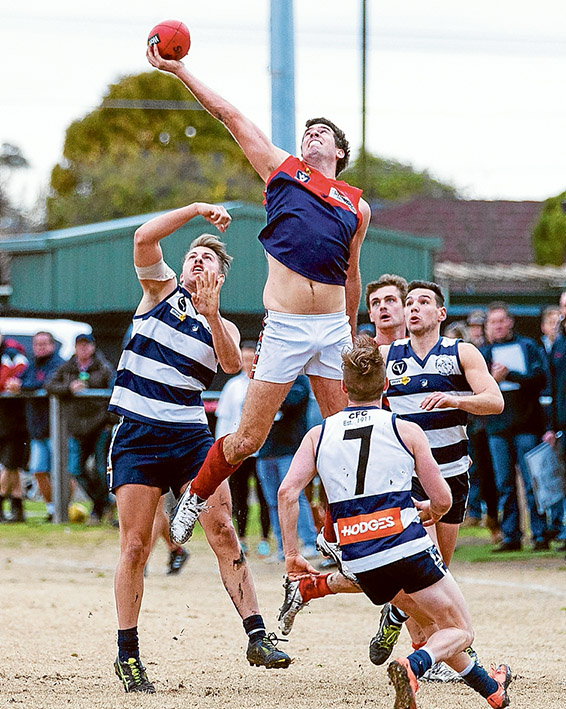 KARINGAL put a week of turmoil behind it on Saturday, ending Edithvale-Aspendale’s 2016 season.

It was a massive game for both footy clubs at Ballam Park, the Bulls hoping to respond to the resignation of their coach Michael Triep on Tuesday, while the Eagles needed to win to reclaim their place in the top five.

Edithvale now needs to beat Frankston YCW at home in the final home and away game of the season while hoping that Mt Eliza can beat Seaford, who is currently in fifth spot.

The Tigers are two points clear on 34 points.

Karingal trailed by 22 points at half time on Saturday and by 19 points at three-quarter time. Everything was going to plan for the Eagles.

However, through the likes of one of the competition’s greatest of all time, Michael Burke, together with Cal Dixon and youngster Christian Matthews, the Bulls booted six goals to one in the final term to run out 10.11 (71) to 8.9 (57) winners.

Earlier in the day on the RPP Footy Show, Karingal President Daniel Watts took “full responsibility” for the coaching dramas of earlier in the week, which saw Triep resign and assistant Leigh Poholke take the reigns for the remainder of the season.

“I may have been guilty of taking my eye off what was happening on the footy field and not listening to some of the things that were bubbling along under the surface.

“In essence, without going into detail, the senior playing group didn’t feel that Michael was the best person to take us forward as senior coach in 2017.

“We spoke with Michael about that and after some consideration, he felt that he couldn’t go on given he didn’t have the support of the full playing group.

“For me personally, it was devastating news. Michael and his family have put more into this footy club in the past three years than anyone I can remember in my time at the club.

“Our seniors have a great crop of youngsters and our U19s, U17s and U15s are all really strong. Michael has been responsible for bringing at least 70 kids to our club. That’s a long way from where we were three years ago.

“As tough as it is though, footy clubs are a business and they have to be run like a business. If the man at the top doesn’t have the support, then a decision has to be made and we have to quickly move on. That’s the nature of footy clubs.

“I’m really, really hopeful that in time, Michael will decide to stay with us in some capacity,” Watts said.

Karingal has already put together a sub-committee to find a new coach and this process will begin “as soon as this week”.

There’s a lot to like about the list of Karingal Football Club and it would be a very interesting proposition for an aspiring or existing coach.

The margin may have been six goals, however 24 scoring shots to eight clearly highlight the dominance of the Stonecats.

The home side opened up a 27 point quarter time lead, however, the margin was just eight points at the final change. YCW then kicked four unanswered goals in the last to win comfortably.

Ash and Nick Waterstone were the best of the Sharks while Luke Damon kicked three goals.

Jimmy Cameron was the best player on the ground while Barry Smeeton was also very good out of the middle. Jai Haddock did the job on Langwarrin forward Kieren Albanese.