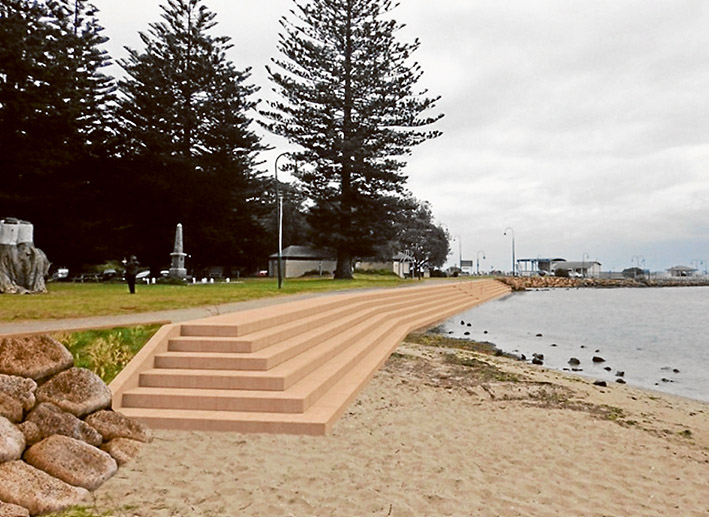 COMMUNITY groups are ready to be consulted on landscaping plans for the area around the new Sorrento seawall. The Department of Environment Land Water and Planning-funded stepped seawall is currently being built and is endorsed by Nepean Councillors and Mornington Peninsula Shire officers.

“It is crucial the community has genuine input into the landscaping plans before the seawall completion, expected before the summer holiday period,” Julie Corridon, of Nepean Conservation Group, said.

“All our members care deeply about where they live and many are feeling a real sense of alienation about their rapidly changing environment and decisions imposed on them.

Ms Corridon said a recent edition of the shire’s Peninsula Wide newsletter said $150,000 had been allocated for coastal vegetation works, including Sorrento seawall landscaping and the Rye landscape plan.

“The Nepean Conservation Group, the Nepean Historic Society and the Port Phillip Conservation Council opposed the stepped concrete [seawall] design; seeing it as a radical departure from the existing vertical timber wall and local granite structures that give the foreshore its heritage character and integrate function with ecological processes,” she said.

“World renowned geomorphologist, Eric Bird cautions that solid seawall structures will interfere with processes such as natural sand renourishment which occurs from cyclical sand drift patterns and cliff and dune accretion. Overseas trends towards living shorelines demonstrate the understanding that resilient and dynamic systems have evolved to protect our shorelines. In July, an EPA grant of $91,000 was made in the U.S. state of Virginia to educate the community on the advantages of working with natural systems.

“Furthermore, the NCG believes that environment determines social behaviour. If you work with the existing natural asset and promote an aesthetically pleasing environment, using local granite, timbers and indigenous plantings; tourists and the local community will feel relaxed, have an authentic sense of the Nepean Peninsula and will be inclined to appreciate and respect their surroundings. On the other hand; hard, continuous concrete structures can invite graffiti, skateboarders and littering as well as damaging natural systems.”

Ms Corridon said comments on social media “clearly express the view that this [seawall] is not a good look for Sorrento”. The community groups are waiting to meet the shire.