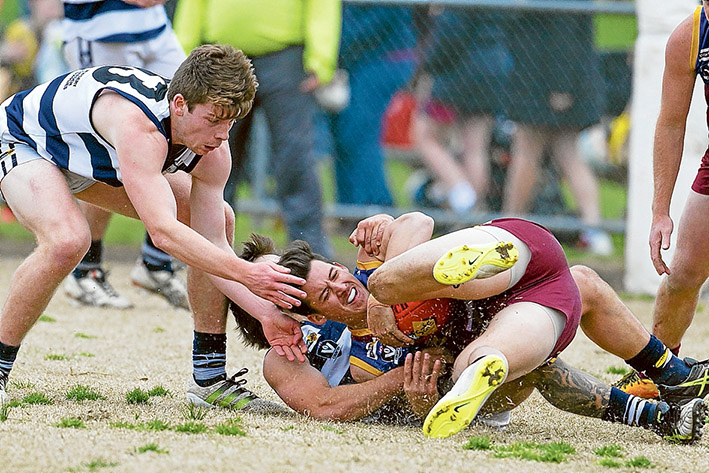 THREE years and three days or a total of 1099 days – that’s how long it had been since the Tyabb Football Club had been on its losing streak.

The Yabbies last win had come in the final home and away round of the 2013 season against Somerville.

The Yabbies booted the first 11 goals of the game before Travis Bravo kicked the Panthers first at the 18 minute mark of the third quarter.

As you could imagine, the Yabbies belted out the club theme song with enormous gusto.

Coach Mark Paganoni said on Sunday morning that he was ‘still pinching myself wondering what happened yesterday.”

The Yabbies went into the game with four second gamers, fielding one of its youngest sides for the season.

In fact, 14 of the Yabbies’ playing group had played just 173 games between them. The average games among the 22 was less than 35.

Paganoni said his team “played out of their skin”.

“We’ve been threatening in fits and starts for a lot of the season but just lacked some belief,” Paganoni said.

“We conceded the first 10 goals against Devon Meadows and then got back to within 19 points, so I think that was the catalyst for the belief.

“Things went our way too. We won the toss, which we haven’t been able to do in games we gave ourselves a chance in, and things just worked out for us.

“The more experienced players in the group supported the younger players and shared the ball with them and it all went really well for us,” he said.

The Yabbies have been so close in 2016 and the final home and away win was just reward for the commitment of the group.

“We’ve had 40-50 players on the track, despite not winning a game, which says a lot about the group,” Paganoni said.

“Now we need to build on that. We need a couple of experienced players, because we have outstanding young talent, and we need some more people to support the club off the field.

“Hopefully this win is the catalyst to take us to greater heights in 2017,” he said.

Hastings and Red Hill will limp into their “do-or-die” elimination final on Sunday at Rosebud after coming-off horror losses in the final round of the season.

Hastings was thrashed by Frankston Bombers, conceding the first six goals of the game, while Red Hill was touched up by Sorrento, who missed the finals.

The Blues went into the game without ruckman Josh Mulherron, coach Brendan Dunne and arguably the best player in the game, Paul Rogasch.

The final score of 18.16 (124) to 15.7 (97) flattered Hastings. The Blues booted six unanswered goals in the final quarter when the game was already iced. They trailed by more than 10 goals at three quarter time.

The reason the Blues were poleaxed was because of poor decision making and execution. The Blues also allowed the Bombers to have numbers behind the footy. They overused the footy and went indirect, playing totally into Frankston’s hands, allowing them to push back in numbers and utilise the spare.

Mark Devereaux and Nathan Gray were targeted physically by the Bombers but they withstood the onslaught and played very good games. Jake Hewitt was outstanding across half back and Scott Foster was clearly their best player.

The Bombers, who finished on top of the ladder, had winners everywhere. Dale Sutton and Sam Fox dominated, Fox booting four majors and Ryan Marks-Logan was outstanding, as always, in the back half.

Red Hill were humiliated by Sorrento.

A 10 goal loss going into an elimination final isn’t ideal.

There are some Red Hill players, who, in the past couple of weeks, have gone away from what they do best and that is hunting the ball and creating their own opportunities.

For the second week in a row, one of the games’ best in Harry Larwill, who is so important for the red and white, has been waiting for silver service. He needs to get back to working hard.

Luke Tapscott was clearly the best player on the ground with five goals, while the Sharks also played Tom Langford in his second game, who had zero influence on the match.