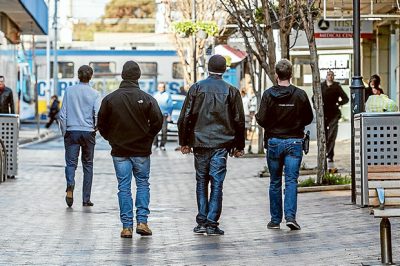 FRANKSTON police are working around the clock to keep residents safe by blitzing crime hotspots, arresting repeat offenders and responding to incidents in public spaces and on train-lines.

Sergeant Phillip Hulley said that, by day 65 of its operation last week, the Shadow Taskforce had made 200-plus arrests – equating to an average of three per day.

“So far, 4122 vehicles have been checked with many of these checks resulting in traffic stops or the execution of outstanding warrants,” he said.

“A large number of the vehicles checked have also been searched for drugs and weapons.”

Sergeant Hulley said task force members had “come out of the shadows” to speak with more than 1194 persons of interest. “Many of those persons were later searched for drugs and weapons where reasonable grounds existed.”

After visiting the 24-hour Frankston police station on Thursday, Police Minister Lisa Neville gave a big thumbs’ up to the officers’ “dedication in serving and protecting the community”.

“Community engagement is the essence of good policing – that’s why it’s great to see Frankston police fostering strong relationships with the local community,” she said.

The Shadow Taskforce aims to actively target repeat offenders through overt and covert police work, while also dealing with aggravated burglaries, drug use and youth crime.

It has reportedly had “a significant impact” in the Frankston retail and business precincts, with local traders and residents noticing more police on the beat.

Police custody officers have been on duty in Frankston since May and are helping to free up police to return to the beat.

In May, police set up the statewide Operation Cosmas to investigate aggravated burglaries and car jackings, resulting in more than 130 arrests.

The $596 million Public Safety Package announced in the Victorian Budget 2016/17 will fund an extra 406 sworn police officers, mobile technology and other specialist equipment.

More than 200 custody officers are working at 22 of Victoria’s busiest police stations, with their rollout to be completed at the end of 2017.