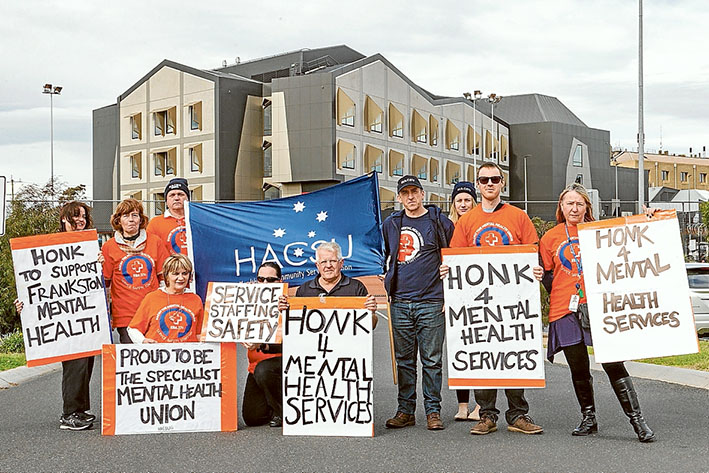 MENTAL health workers walked off the job for two hours on Tuesday 9 August in protest over “violent incidents and increasing demand” at Peninsula Community Mental Health Service at Frankston Hospital.

The Health and Community Services Union (HACSU) said extra staffing and safety for staff should be a top priority and is demanding a new enterprise bargaining agreement “to improve service delivery, staffing levels and safety for workers and consumers”.

“We need a system that meets the demand, we need to attract, retain and value the work of mental health workers in order to meet this demand,” HSU representative Paul Healey said.

“The Victorian government must invest in this area or it will pay a heavier price down the track with people becoming marginalised, creating social dislocation and suffering.”

Mr Healey said violent attacks on staff are “not uncommon”.

“Clinicians have been pinned down, spat on and assaulted.”

EBA negotiations are being held between the HACSU, Victorian Health Industry Association and the Victorian Department of Health and Human Services.

“Peninsula Health is not involved in these negotiations,” Ms Reed said.

“We recognise that people working in our mental health system do vital work in a difficult environment,” Hayley McNaughton said.