Blues and Bombers to square off in Granny 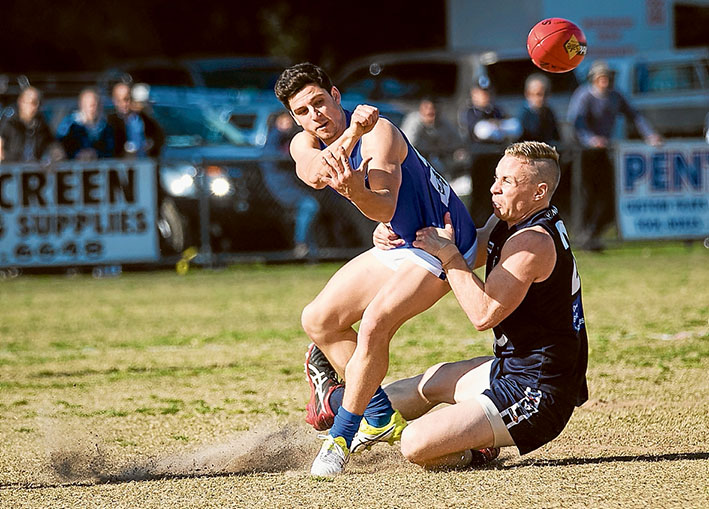 HASTINGS will play Frankston Bombers in the 2016 Nepean Division Grand Final this Saturday at Frankston Park after hanging on to win a thriller against Rosebud.

The Blues have beaten Red Hill, Somerville and now Rosebud in the lead up to the big dance and have just one more top five side to beat to claim the 2016 title.

The minor premiers Frankston are the only team to stand in their way, having the ideal preparation of a rest in week one of the finals and then another break after advancing through after winning their second semi-final.

Hastings kicked the opening goal of the game and were never headed in the match despite being challenged, eventually winning 14.11 (95) to 12.16 (88).

Blues coach Brendan Dunne told the RPP commentary team straight after the game that his side “had been building for the past six weeks” to get to this point.

“The Sorrento match at home in tough, wet conditions was a defining moment for the group,” Dunne said.

“We lose that match and our season could have gone the other way. We win and the season is set up for us.

“It felt like something clicked within the group on that day and we haven’t really looked back.

“We have been training extremely well, our performances have been a lot more consistent and we have absolute buy in from the entire group about the way we want to play our footy.

“There is a Hastings brand now and it’s taken three years to slowly build to get to this point,” Dunne said.

The coach was absolutely superb throughout the match, leading the backline along with Paul Rogasch, both taking telling marks, laying important tackles and providing enormous structure and leadership during the tense final quarter.

Dunne said his body was feeling the effects of running back with the flight of the ball one too many times, but conceded he wouldn’t swap the feeling for anything.

“I’m grateful to be still playing and having an opportunity to win a premiership,” Dunne said.

“I missed 21 weeks of work though injury last year and I thought that might have been it. I did the pre-season, the body felt great and here I am now. It’s a really good feeling.

“All we’ve done though is earn the right. It’s a good achievement to get there, but you don’t play to get there, you play to win it. We’ve got the opportunity,” Dunne said.

Dunne was clearly one of Hastings’ best on Saturday, along with Rogasch and underrated full back Lance Brouwer, who is rarely beaten despite having some big jobs most weeks.

The Hastings’ forward line again looked dangerous with Dale Alanis, Luke Hewitt, Col McVeigh and Stevey Robb all kicking multiple goals. Robb lit up Tyabb in the final quarter. Hewitt could have put the opposition to the sword and should have finished with five or six goals. He was still outstanding though.

Through the middle, Mark Devereaux and Pete Mawson got first use of the footy, Josh Mulheron competed well with Ben Dwyer and Shaun Foster, Luke Clark and Matt Clifford played the swing men roles to perfection, both reliable and damaging in all areas of the ground.

Despite getting out to a four goal break deep in the last quarter, Rosebud never stopped coming.

You have to take your hat off to the Buds. They were relentless and their leaders in Rhys Bancroft, Greg Bentley, Dwyer, Brenton Payne and Ryan Spooner willed their team to the finish line.

The Downie brothers are bonafide stars! Keegan should be on an AFL Rookie List, such is his enormous talent. His aerial ability is breathtaking. He finished with three goals. His little brother Sean got belted from pillar to post but continued to pick himself up off the deck. Sean kicked a game-high four majors.

Dale Stephens and Daniel Wilson were also stand outs for the Buds.

It was a sensational season for Rosebud, given the calibre of players they lost during the pre-season.

For Hastings, they are in the big dance against Frankston Bombers this Saturday at Frankston Park.