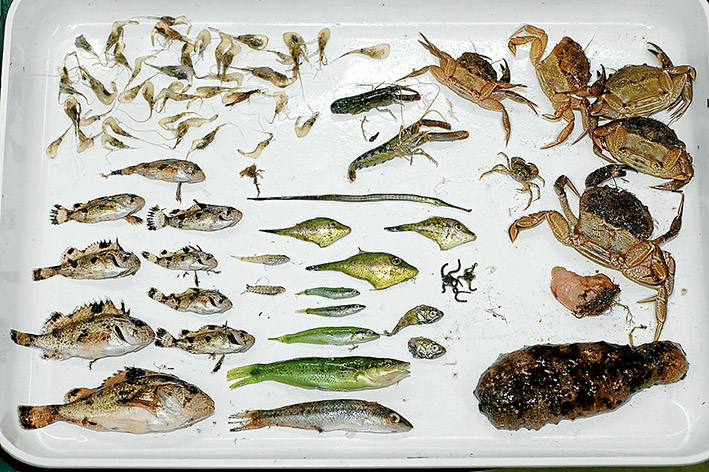 BENCHMARKS are being set to monitor the number and variety of animals living in Western Port’s seagrass beds.

Known as the bay’s marine nurseries, a series of night trawls of the seagrass beds in January captured 14,073 animals from five species.

The most common animals were crustacea – which includes crabs, lobsters, crayfish, shrimp, krill, woodlice and barnacles – and fish.

A team of researchers from the Western Port Seagrass Partnership will repeat the trawl to compare animal numbers and varieties in summer and spring.

The trawl was carried out at night as many of the animals which live in or under the seagrass only emerge in darkness.

Dr Kirkman said the need for a taxonomist to analyse and report on the results made such studies prohibitive but this one had been made possible with backing from Esso.

He said the fine net being used for the beam trawl was designed for small animals and easily avoided by larger fish.

“There were not many juveniles of useful or edible fish, we expected more,” Dr Kirkman said.

“We wanted to show how many useful fish [were in the grass bed] but there were not many at all.

“We can use the results as a monitoring tool and plan a spring trawl soon.”

A report on the results of the trawl co-written by Dr Kirkman, Ian Stevenson and Lynda Avery, states that Western Port’s seagrass meadows “have long been recognised as biologically and ecologically important marine ecosystems that provide habitat, food and refuge for a wide variety of animals”.

Known as blue carbon, the “vast carbon reservoirs” lie in the soil and sediments under the seagrass.

“Seagrass meadows are also important breeding and nursery grounds for commercially and recreationally caught fish, crustacean and mollusc species [and] support a greater diversity and abundance of animals than neighbouring unvegetated areas of seabed,” the trawl report states.

The researchers say the degradation or loss of seagrass “can therefore result in significant reductions in the productivity and biodiversity of shallow marine ecosystems”.

The trawls of the seagrass beds within the Yaringa Marine Sanctuary resulted in five times more animals being captured than on the bare sandy silt area.

“Although there were more fish on seagrass than on unvegetated sandy mud, there was a greater diversity on the unvegetated substratum. There were surprisingly few fish caught in these beam trawls. Most were juveniles but few would become of commercial or recreational importance when they grew,” the researchers reported.

Dr Kirkman said choosing one fish species – possibly pipefish – to monitor on a regular basis could make it easier and much cheaper to continue trawls.

The unvegetated trawl site was on the dredge spoil next to the Yaringa channel in at a depth of 1.5 metres.

Dr Kirkman said similar trawls had been carried out at Albany in Western Australia, Kangaroo Island, South Australia while another was being planned for Port Phillip at the Jawbone Marine Sanctuary at Williamstown.