Blues climb to top of mountain 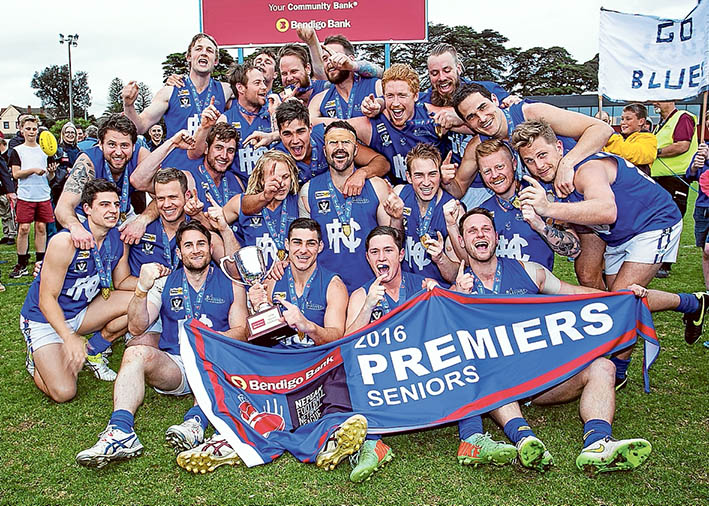 HASTINGS are the 2016 Nepean League Premiers.

The Blues defied the odds, won three cut-throat finals and dominated for 120 minutes in the Grand Final on Saturday to be crowned the kings of Nepean League football. The Bombers came back hard in the third quarter and had a shot for goal to reduce the margin to 10 points. The shot missed, the Blues went coast-to-coast and kicked their sole goal of the third term to extend their lead to 21 points.

It was a tough Nepean League season – arguably the closest ever.

There were seven teams in the competition with genuine claims to the flag at various stages throughout the 16-round season.

There was one team though that perhaps had more claims than the others – Hastings.

At the halfway mark of the season, Hastings was the best team in it, and a game clear on top of the table after 10 rounds.

But it wasn’t until the line-in-the-sand game against Sorrento mid-season that the Blues shifted up a gear.

The Blues knew they had what it took to win the flag – they certainly had the cattle.

Although if the group didn’t collectively buy into the Brendan Dunne coaching style and game plan, achieving the ultimate success was going to be a struggle.

Against Sorrento, on a cold and wet day and on a boggy track, the Blues found something. They were challenged by the Sharks but found a way to get down, get dirty and win.

The Blues found real belief on that day.

Hastings had a really tough road to the finals – then it had the toughest of roads to the final day.

Hastings took on Red Hill, Rosebud, Sorrento, Somerville and Crib Point in their final six games. They also played Frankston at Frankston in the final home and away game of the season.

That match meant everything to the Bombers to finish on top of the ladder.

Hastings wasn’t going to move on the ladder on that day and rested Paul Rogasch, Josh Mulheron and Dunne.

The Blues knew what they needed to get out of that game – they planned on facing the Bombers again.

At the conclusion of the home and away season, Frankston found itself clear at the top of the ladder.

Frankston’s last six games of the season were against the bottom five sides in Crib Point, Tyabb, Devon Meadows, Dromana and Pearcedale (as well as Hastings).

The Bombers had a week’s break, won through to the Grand Final after beating Rosebud in the second semi and then had another week off.

Some would say it was the ideal preparation – the Bombers were certainly rested.

Hastings were ‘match hardened’. Question was, when would the petrol tickets run out?

Many thought it would be on grand final day on a warm afternoon at Frankston Park, a ground 20m longer than any in the MPNFL.

Was the toughest of tough campaigns going to take its toll?

No way, if you were a Hastings player or supporter.

Hastings stalwart and media personality Kevin Miles maintained throughout the finals series that “Hastings’ best was better than any other team”. Usually conservative about his beloved Blues, Miles said pre-game that his team was a “certainty” to win the 2016 premiership.

The coach too said he preferred the road that his side took to the big dance.

Brendan Dunne said for his team, the continuity of playing together, building rapport, extending mateship and gaining confidence by winning big games was the “ideal preparation” for his group.

After the Preliminary Final, Dunne was the first to say that his team “pulled up really well” and was still fresh in the lead-up to the Grand Final.

There was no evidence to suggest otherwise on Saturday.

Right to the final siren, the Blues were running everywhere on ground – no doubt the adrenalin kicked in the closer they got to the ultimate prize.

History shows premierships are won by teams who have more contributors all over the ground.

Hastings isn’t and doesn’t claim to be flashy – the Blues are structured, disciplined and defend better than any other team.

Paul Rogasch is the best player in the Nepean League – it’s not the first time I have said this.

Any doubters were proved horribly wrong on Saturday. The Hastings premiership captain dominated the Bombers across half-back, had more than 30 possessions and took more than 20 marks. There was little question who the best player on the ground was.

The Bombers brains trust failed to get it right against Rogasch. Why would you leave the best player in the comp alone for the majority of the match without an opponent?

Rogasch would be the first to tell you that his job is made easier due to the support he has around him.

Dunne himself had an outstanding finals series – the great players and leaders stand up when it matters.

Terry Green, Jay Austerberry, Lance Brouwer and Andrew Booth are also unheralded. They are a significant part of the back six and have rarely been beaten at any time throughout the finals.

Jake Hewitt was the biggest improver at Hastings this season – he is only going to get better.

In the ruck, Josh Mulheron and Josh Ward dominated in that area. Even when ‘Mully’ left the ground for a well-earned spell after blitzing his opponents, Ward continued the domination, both in the air and having an impact at ground level.

At ground level, the Blues had more depth in that area.

Luke Clark was a trump card and repaid the faith that the Blues had in him. Luke Smith was the same – his finals series proved what a quality player he is.

Matt Clifford and Shaun Foster would have to be among the best recruits any club has picked up. They are versatile, skilled, tough and smart footballers who make the right decisions at the right time. They are wonderful people to boot.

The Hastings’ forward line was always going to be a handful for Frankston.

Draw comparisons all over the ground and Hastings came out on top.

And only one club will be remembered as a champion team: Hastings Football Club, 2016 Nepean Division Premiers.