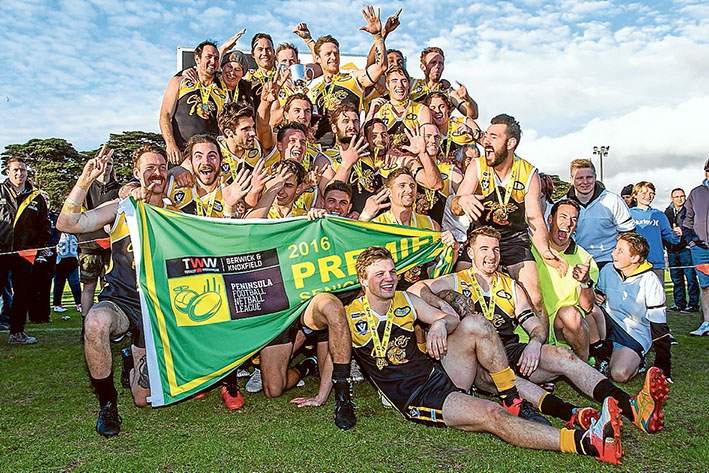 FRANKSTON YCW made it three premierships in a row and six in the past seven years after beating Mt Eliza by 22 points at Frankston Park on Sunday.

The Peninsula Division champs booted seven goals to one after half time, totally controlling the last hour to win the “three-peat”.

After conceding the first six goals of the game in the second semi-final against YCW, it was important that Mt Eliza got off to a good start in the big one – and they did.

Mt Eliza led by four points at quarter time and when Jordan Capkin snapped a left foot goal halfway through the second quarter, the margin had blown out to 21 points.

Matt Lillie was playing a pivitol role in the ruck, Rohan Heasley was winning ball in the middle, the Mt Eliza defence was standing up and the ball movement and forward structure looked dangerous.

The Redlegs needed to match YCW’s ability in contested footy and were doing the job there, as well as trying to exploit them on the outside.

At the 25-minute mark of the second quarter, Mt Eliza was in total command.

However, in time on, the Stonecats went coast-to-coast, Dave Bodley slipped out the back, took a mark and kicked a mark just before the half time siren.

The dangerous, all-conquering Stonecats had a sniff!

The message from YCW coach Scott Mathers was simply – “start taking risks and take the game on”.

The Redlegs were controlling the game and playing on their terms – YCW needed to respond.

As all great teams tend to do faced with adversity, Frankston YCW took a stand.

Ash Eames started to will himself higher in the ruck and started to get his hands on the footy first more regularly.

Best man on the ground Scott McLeod, along with Tony Lester, Kyle Hutchison and Luke Collins, started to win that contested footy and the forwards started to work harder.

In the first half, YCW forwards were a little lazy, waiting for the easy ball to some to them.

They worked harder in the third and the result was four third quarter goals to Anthony Bruhn.

The Stonecats started to switch the play, cut the angles and move the ball through the corridor – they started to take risks.

Within a blink of an eye, the 16 point half time margin was back to four points and by three quarter time, YCW had hit the front.

When Zinzi Mosimaine grabbed hold of the footy from 50 metres at the Kars Street end in the opening minutes of the final quarter and converted, the game was over.

YCW was dominating in all areas of the ground and Mt Eliza just could not penetrate beyond their half forward line.

Byron Barry and BJ Credlin were monumental – unstoppable! Credlin stopped Justin Van Unen completely, not just in the last half, but the entire game.

YCW youngster Jake Lovett was outstanding throughout, as were fellow youngsters Michael Debenham and Matt LaFontaine.

The Stonecats booted three goals to a single behind in the final quarter, the last one coming from a left footer from Bruhn on the run from 50 metres.

After the game, a retiring Mathers said “this is the most wonderful feeling I have ever had in football.

“We knew we needed to just stay with them and grind away, which we were able to do,” Mathers said straight after the final siren.

“Our intensity needed to lift and we needed to start taking risks, which we were able to do after half time,” Mathers said.

Byron Barry, who also celebrated his sixth flag, said “we made too many mistakes early.

“We needed to take the game on and get some lateral movement – I thought we did that after half time,” Barry said.

There have been many great teams talked about throughout the footy journey over the past 30 years – YCW in the 90’s, Edithvale, Mornington and Seaford in different eras.

On Sunday, Craig Nankervis broke the MPNFL record of playing in seven premierships – a handful of others won their sixth flag.

Make no mistake, this YCW footy era is the best we will see. Ever.