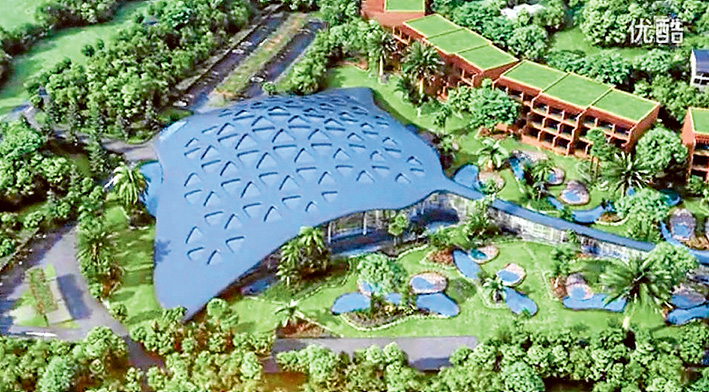 The Chinese-backed project, valued at several hundred million dollars, is designed around its two 18-hole golf courses at Fingal. It will include a 450-room, five-star hotel, a conference centre with seven restaurants, and three grand recreation centres: hot springs resort, water theme park and spa therapy resort. A golf institute built on the courses will be linked to 12 golf schools in China.

The Chinese-led Peninsula International Group is making a bold pitch for the project, with an array of consultants being briefed for presentations to Mornington Peninsula Shire.

It bought Moonah Links with its two golf courses, as well as a hotel at Fingal, for $18.5 million in August last year, according to industry sources. The golf resort covers 238 hectares with its Legends and Open courses.

A promotional video describing the peninsula as “a paradise” and “one of the world’s must-see places” is aimed at international visitors. It promotes the region’s beaches, wineries, golf courses and tourist attractions, and emphasises Melbourne’s long-standing mantle as “World’s Most Liveable City”.

Mornington Peninsula Regional Tourism Board managing director Matt McDonald said sustainable tourism, such as that espoused in the hotel and golf development, was more beneficial than day-trips for the region’s economy.

“Tourism is the No. 1 employer on the Mornington Peninsula and we welcome sustainable tourism investment that promotes jobs and visitation to the region,” he said.

“The proposed development seeks to grow year-round visitation from domestic and international visitors, factors that are critical to the long-term success of the visitor economy on the Mornington Peninsula.”

“It also builds on some of the state’s strengths, being sport, recreation and international students – markets in which the Mornington Peninsula has not been strong historically.”

He said neither the tourism board, nor the Mornington Peninsula Shire, were “across the detail of the development as yet”.

“I am only seeing it for the first time but am following it with great interest”.

The Moonah Links site has reportedly long been earmarked for tourism development. “However, the proposal needs to go through the necessary planning and regulatory process with the state and local governments.”

Acting Tourism and Major Events Minister Philip Dalidakis said through a spokesman: “We want to see world-class destinations like the Mornington Peninsula continue to offer an unforgettable experience for visitors because it means more opportunities for nearby businesses and jobs for locals.

“That’s why we’ve helped the developer with ways they can work with the Mornington Peninsula Shire to make this proposal work, like we do with many organisations with bold plans for great projects.”

The developer has not sought state government funding for a project. “[They] have made representations to the government regarding facilitation advice, which the government has provided,” he said.

“The matter remains one between the developer and the Mornington Peninsula Shire.”