Crafty U3A to go on show 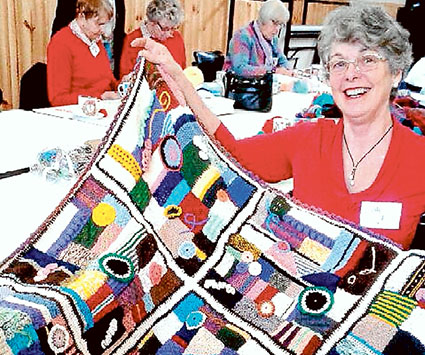 FOR almost a year, the ‘Currawong Crafties’ have been diligently sewing, knitting and crocheting for the great U3A Mornington Art & Craft Show on Friday 28 October.

Crocheting member Stella Hamilton is pretty proud of her beautiful rug, and is hoping a grand-child in the not-too-distant future will be able to pass it on through the family.

Her rug is made up of ‘lots and lots’ of wool – some new, some self-spun and some unravelled from garments owned by other family members, including her mother-in-law. It is an instant family heirloom, filled with memories and connections to the past.

Led by tutors Margaret Thompson and Jeannie Bridger, the ‘crafties’ have been working on their ‘challenge bag’ projects which started early in the year when they were given a bag containing a piece of Christmas material which had to become part of a project.

Ms Hamilton, who has been a U3A Mornington member for 11 years, has enjoyed language courses as well as painting classes, but her biggest delight is belonging to the crafties – which, she says, is “more than just a craft group”.

“The friendships have been a great support in some difficult times.”