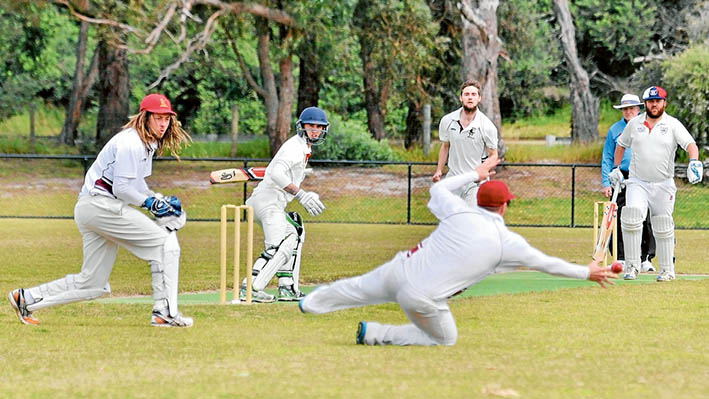 All eyes on the prize: Attention is focused on one Skye fieldsman as he reaches out for a passing ball. Skye are struggling in their Sub District match against Ballam Park. Picture: Rab Siddhi
Share
Facebook Twitter LinkedIn Pinterest Email

MORNINGTON are just seven wickets away from a comprehensive victory against Pines in MPCA Provincial cricket after 13 wickets fell on the first day.

The Doggies had the Piners reeling at 3/8 at the close of play after the visitors had to face the final six overs of the afternoon.

The only good news for the Piners is that of the three wickets that fell, only one was a recognised batsman (Jarred Coad).

Rhys Chalkley remains at the crease with Harley Peace-Stirling while Craig Entwistle and Damien Lawrence are still to come.

The visitors will be chasing down 193 for victory after the Doggies were bowled out for 192.

Skipper Matt Foon was superb again with a high score of 46 while a number of players got starts but couldn’t go on with it.

Entwistle was the pick of the Pines’ bowlers with 4/16 from 6.5 overs, giving his side a slight sniff.

Langwarrin is up against it, chasing 255 for victory against Baxter.

The top order for Baxter set the tone against the Kangas, Daniel Warwick opening with 54, Chris Brittain scoring 61 and Justin Bridgeman 68.

An unbeaten 124 from Keith Biggs has Mt Eliza in a reasonable position in its match against Crib Point.

Biggs scored more than half of Mt Eliza’s entire score of 9/235. Only Shaun Knott (35) and Tim Strickland (24) contributed anything worth noting.

Warren Herrington and Henry Dolphin snared three wickets each for the Magpies while Luke Herrington chipped in with 2/11 from six overs.

Sorrento has set Somerville a big task of 271 for victory on day two of the match.

The top order for the Sharks was solid with Corey Harris getting 27, Jack Falck 48, Liam O’Connor 45, Bobby Wilson 63 and Brandon Rulach 38.

Russell Wilkes was superb with the ball for the Eagles, picking up 5/86 from 21 overs.

Pearcedale superstar Kaine Smith snared 5/31 off 17 overs to help his side roll Long Island for just 156.

In reply, the Dales have started steady, scoring 0/17 off the first 13 overs.

Peninsula Old Boys continued its domination of the opposition. The Old Boys are just 69 runs away from victory against Moorooduc.

Jon Forrest was at his vintage best for the Old Boys with 5/32 from 20 overs as the reigning title holders rolled the Ducs for just 139.

In reply, the Old Boys are making light work of it, Dylan O’Malley unbeaten on 46 and Wade Pelzer on 21 after just 14 overs.