Goals on the horizon 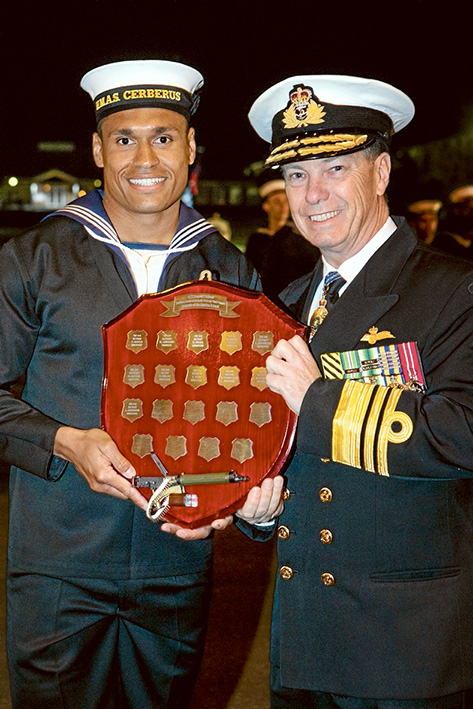 SOME people have a goal in life they’re willing to work hard for, to give it their all, until it’s finally within their grasp.

For 11 indigenous young men and women, that goal was achieved on Thursday 13 October when they graduated from recruit training in front of family, friends and the Chief of Navy, Vice Admiral Tim Barrett, AO, CSC, RAN.

For Seaman Star Marine Technician Jeff Andrews, the hard work was worth the effort. Awarded Recruit of the Intake and Sportsperson of the Intake, Andrews impressed with his performance, attitude, skill at motivating others and in helping fellow recruits achieve their goals.

“I had several attempts to get into Navy before being accepted by the Defence Indigenous Development Program – Navy. I was determined and lucky to be given the opportunity,” Andrews said.

“I have a twin brother in the Army who has served eight years. He’s very proud of my achievement and I’m proud of his. This sense of direction has been one of the most rewarding feelings.”

The path to enlisting in the ADF can be a long one. For the 11 indigenous graduates of General Entry 346, Emms Division, the journey started in March when they began the five month program in Cairns, Queensland, managed by the RAN Recruit School. After that they applied to remain in the Navy and started initial entry recruit training on 1 August.

Asked why they chose the Defence Indigenous Development Program and Navy, their answers had a common theme of becoming a role model to their family and communities. Each graduate pointed out that “back home” they had limited opportunities – they had jobs, not careers. Seaman Star Maritime Logistics – Chef Jessica Thompson said that being away from her family was her biggest challenge, but that enlisting with her fellow graduates felt like she was bringing her family with her.

Vice Admiral Barrett congratulated the graduates on reaching the first milestone in their naval careers and shared some advice for their future. “Do your best, no matter what the task is. The work that we do, at sea and ashore, is rarely easy, often demanding, and potentially dangerous.

“You will be well-trained and well-prepared, but to achieve success you will need to dig deep and display determination and endurance.”