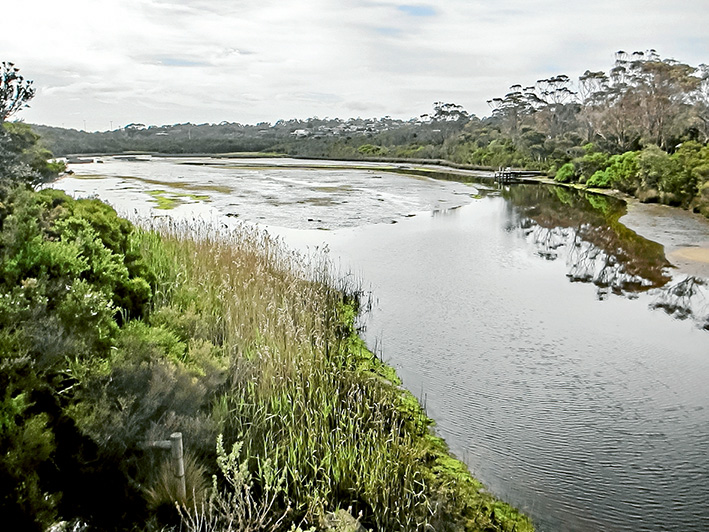 “We are grateful to council realising the severity of the problem and coming to the party to solve it.”

BERG Mt Martha says the level of sedimentation is changing the estuarine environment resulting in loss of habitat and food sources for aquatic animals and birdlife.

“The food source for black swans, such as aquatic plants, appears to have disappeared … and so have the swans,” a brochure published by the group states.

Mr Hubbard says the main cause of increased sedimentation is the erosion of unmade roads and private driveways bordering the creek and estuary.

“Regular scouring of road surfaces and swale drains sends crushed rock and other material down stormwater drain inlets into the creek,” he said.

“Heavier, coarser material is deposited at or below the stormwater outlet, impeding the natural flow of Balcombe Creek.

“Finer particles are swept down to the estuary where water salinity causes them to settle and build up on the estuary floor.”

The group has identified regular scouring in Augusta, Ailsa and Byron streets.

The group has identified other causes of sedimentation as being:

“Silt is causing the estuary to become shallower and is destroying once-thriving seagrass and saline herb fields,” Mr Hubbard said.

“Water quality in both the sea and estuary has been reduced, and there is an increased likelihood of harmful pollutants entering the creek as it flows past two old landfill sites at Mt Eliza and opposite The Briars.”

The group wants a long-term strategy developed for the creek and estuary to preserve its ecology.

Mr Hubbard said a pointer to BERG Mt Martha’s growing profile is the promise made by an anonymous donor to match dollar for dollar all donations for on-ground work up to $50,000.

Inspired by the challenge, two BERG Mt Martha members, David and Bronwyn Street, have given the group $10,000 which will trigger $10,000 in matching funding.