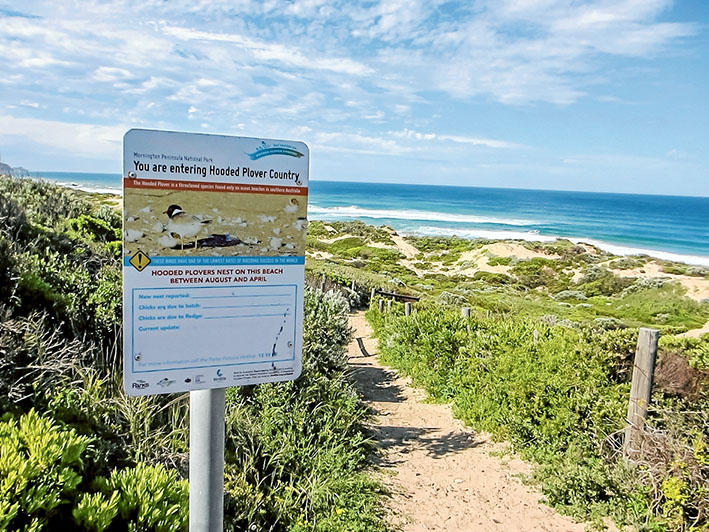 PARKS Victoria has warned residents abutting the Mornington Peninsula National Park that it is about to begin poisoning foxes and feral cats in the park.

The baiting program follows the total ban of dogs in the park from today (Tuesday 1 November).

“All baiting programs within parks adhere to strict user guidelines and application specifications for the bait in use,” Mr Rowe said. “Parks Victoria staff and contractors have legal obligations to follow and specific accreditation to do so. Strict guidelines apply, such as preparing and burying the baits to reduce the risk to non-target species.”

“The area [to be] baited is occupied by residents and their domestic pets and many types of birds and other wildlife, both native and introduced,” he said.

“A bait laid for the introduced species is completely random and has an equal chance of killing both the native fauna and the domestic animals.”

He said meat-eating birds, such as magpies, could drop the baited meat in backyards where they could be eaten by domestic animals or even toddlers.

Mr Rowe said magpies were unlikely to find the baits “given they are buried as per the strict directions that are in place”.

He said the dog ban from 1 November in the national park would enable Parks Victoria to expand its fox and feral cat control programs. “This will increase the program’s effectiveness and give native fauna, particularly threatened species, their best chance of survival.”

Over the past six years cameras monitoring the national parks had shown that foxes frequent the same areas as native birds and animals.

Results of the monitoring show where native fauna is under the greatest threat and where traps can be set for foxes and cats, particularly during shorebird breeding season in spring and early summer.

Dogs have never been allowed in Point Nepean National Park, but have until now been given restricted access to parts of Mornington Peninsula National Park.

Russell Joseph, spokesman for Nepean MP, Liberal Martin Dixon, said all three major parties supported banning dogs in the national park and follows a review showing that many dog owners were not complying with trial dog-walking restrictions introduced in 2013.

The national park has more than 32 fauna species of significance, including the threatened hooded plover, migratory shorebirds, marsupials, including the white-footed dunnart and the long-nosed bandicoot, and reptiles, including the blue-tongued lizard.

“All these native animals will directly benefit from the dog ban,” Mr Rowe said. “Many are susceptible to dog attacks and even the scent and barking of dogs can cause distress.

“Removing dogs from the park will enable [us] to broaden the pest fox-and-cat programs to increase their effectiveness and give a range of threatened species their best chance of survival.”

The reintroduction fox and wild dog bounty is an acknowledgement that the pests are “beyond eradication” and require ongoing management by public and private land owners, an Agriculture Department statement says.

They prey on livestock, especially lambs, inflicting significant economic and production loss to Victoria’s livestock sector, and are believed to have a “significant impact” on native fauna.