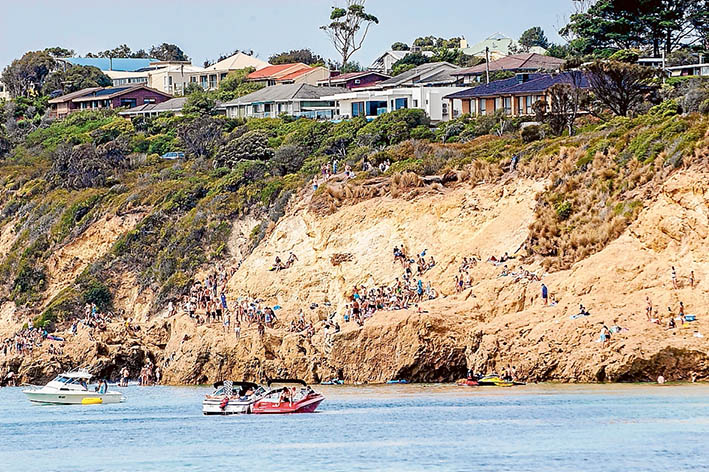 RESIDENTS’ plans for a walkway along the cliff-face linking the increasingly popular The Pillars diving rocks with South Beach, Mt Martha, may be scuttled because of impracticalities and high costs.

The group said in a letter to newly-elected Briars ward councillors Bev Colomb, Rosie Clark and Sam Hearn that a “timber boardwalk, like that at the Balcombe Estuary, would protect vegetation and Aboriginal middens, prevent any further soil erosion along the cliff, and keep people off the Esplanade and out of local streets”.

“Already a pathway runs halfway from South Beach to the Pillars. It would be fenced, like the Cape Schanck Lighthouse walk, which traverses a far more dangerous and extreme cliff face and landscape,” the letter stated.

But new mayor Cr Bev Colomb said a fenced walkway, while “wonderful” in concept, may be too costly.

“I’m not ruling it out, but residents would have to understand that there may be limitations to council raising that kind of money – especially if it is cantilevered out along the cliff face,” she said.

“It is the Department of Environment, Land Water and Planning’s land.

“I would love a pathway but how would we do it? And maintaining it to certain standards would be a big financial imposition.

“It could be a solution but we would still have to solve parking problems. Where would we put the cars?

“Suddenly we would have people at South Beach complaining about parking.”

Traffic congestion and the sheer number of mainly young people around the popular hangout is a recurring nightmare for residents in streets such as Deakin Drive and Margeurita Av, who claim up to 800 visitors a day over the past three years have jammed streets, dropped litter and damaged vegetation on weekends.

Ensuring safe access to The Pillars is the residents’ key issue, as social media hype advertising the pristine water, jagged cliffs and challenging jumps continues to lure adventurous crowds from all over Melbourne.

With the thrill seekers have come genuine fears of serious injury to those jumping from high up, or to the hordes of pedestrians meandering along the narrow, winding The Esplanade.

Air Ambulance, Victoria Police, Mt Martha Life Saving Club and VicRoads “have all been struggling to manage the dangerous situation, not only from casualties from jumping or climbing on the cliff edge, but also from the lack of any safe crossing points along The Esplanade [for those] looking for entry points to The Pillars”, the residents’ letter said.

“There are no signs or crossings at all. There are no bins, no toilet facilities, no safety fencing and no adequate parking spaces.”

The letter said Deakin Drive residents were “furious” that current No Parking areas would now be [made] available for “additional visitor parking”, by the council.

“The council has done nothing to provide for visitor safety while crossing The Esplanade. There is no safe crossing point.”

The residents say the fact the council has not identified any safe crossing places makes a mockery of it allowing extra parking in Deakin Drive. “It is ludicrous and, surely, council will be liable in the event of a fatality in this area.”

The state government has put in $30,000 and the shire $20,000 for risk mitigation works and to develop a management plan under the Coastal Environments Public Access and Risk Program.