Beware when bluebottles sail to shore 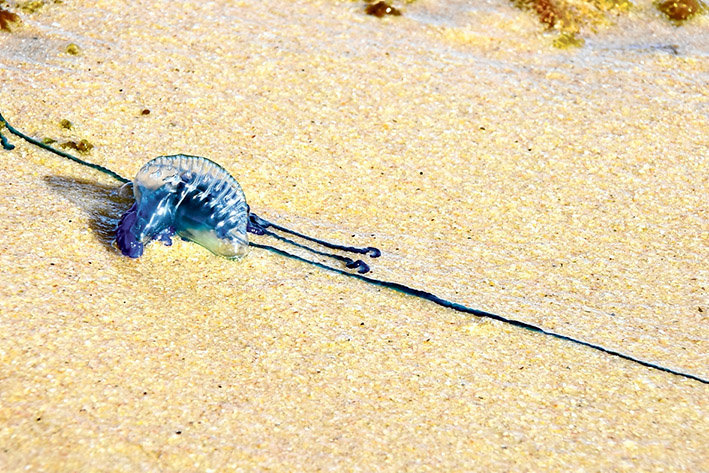 VISITORS to the peninsula’s bay and ocean beaches may have noticed the prevalence of bluebottle jellyfish.

The common bluebottle, Physalia utriculus, is smaller and less venomous than its Atlantic cousin Physalia physalis – or Portuguese man o’war – but it can still produce a painful sting.

While they may look like a single marine creature they are actually colonial organisms known as siphonophores, with separate animals specialised for food capture, digestion, reproduction, and one that makes up the gas-filled float. The animals cannot function alone and the whole can only survive as a colony.

The floats can grow up to 150mm long and tentacles to more than a metre.

The animals capture fish and small marine creatures by dragging their tentacles through the water and stinging and killing their prey.

When swimming or walking near the shoreline keep an eye out for them but don’t get too close. The sting is quite painful but it generally subsides in about half an hour.

If stung, Surf Life Saving Australia recommends carefully removing any remaining tentacles and soaking the area in hot water or covering with ice packs. Do not scratch or rub the sting site.

Often accompanying each armada are other floating marine creatures, such as by-the-wind-sailor, velella velella, porpita sailors, porpita porpita, and other species of blue drifting invertebrates.