By IT GullyDecember 12, 2016No Comments3 Mins Read 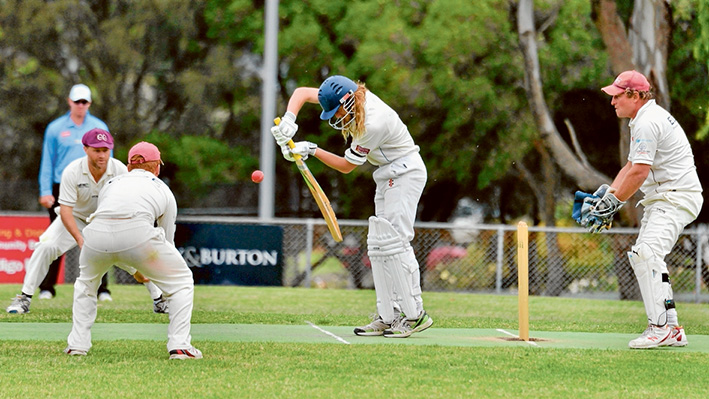 BAXTER’S Chris Brittain smashed his second big century in as many matches on Saturday as his side posted 7/363 against Crib Point.

Brittain belted 10 sixes and nine fours in his massive knock of 181, backing up the 155 he hit against Mornington the match before.

Both the Magpies and Doggies have some of the best bowlers running around in the MPCA.

In addition to two massive tons, Brittain has also hit two half centuries against Langwarrin and Sorrento this season, giving him almost 500 runs for the year.

Former Victorian wicket keeper and South Australian coach Darren ‘Chuck’ Berry told radio SEN listeners during the week that Brittain’s knock of 155 was one of the best he had seen. Berry does some specialist coaching at Baxter and at Mornington.

While Brittain’s knock was something special, there was a more than reasonable batsman at the other end dominating the attack – Daniel Warwick.

The Baxter skipper was superb in his knock of 124. The highest score after that was Ben Brittain with 13.

Regardless, almost 400 will be too many for the Magpies to track down.

Langwarrin is just 37 runs from victory against Pines after the first day where they bowled out the home side for 109.

Kangas skipper Travis Campbell was at his best as he led the charge with 5/35 from 13.1 overs, while leg spinner Matty Prosser made it 13 wickets for the season with 3/22 from 14 overs.

In reply, Langwarrin isn’t out of the woods, four wickets down for 73. Matty Prosser was the best of the top order bats with 24. Campbell and Aaron Edwards are the not out batsmen.

Nick Wilcox and Pat Jackson each have two wickets for the Piners.

Sorrento has already won its match against Moorooduc.

The Ducs batted first and were bowled out for just 85. John Collison scored more than half of the runs with 43.

Nick Marshall also opened with 35 to help the home side to a very competitive total.

Chris Hocking and Stuart Swift were the pick of the bowlers with three and four wickets respectively.

Mt Eliza and Peninsula Old Boys are locked in what appears to be a tight tussle.

In the battle of the neighbours, the Mounties batted first and posted 263.

Damien Kent was among the runs again for the home side, opening with 84, Keith Biggs hit 57 and Tim Clark 45 to be the key run makers.

Evion Bowen and Jon Forrest each claimed three wickets for the Old Boys.

Mornington looks set for victory against Pearcedale after a solid day with the ball.

The Doggies rolled the visitors for 132, Michael Heib dominating with the ball with 7/46. Brad McDonald claimed 2/27.

Shayne Gillings (38) and max Blackburn (34) offered some middle order resistance for the Panthers when their side was reeling at 4/38.