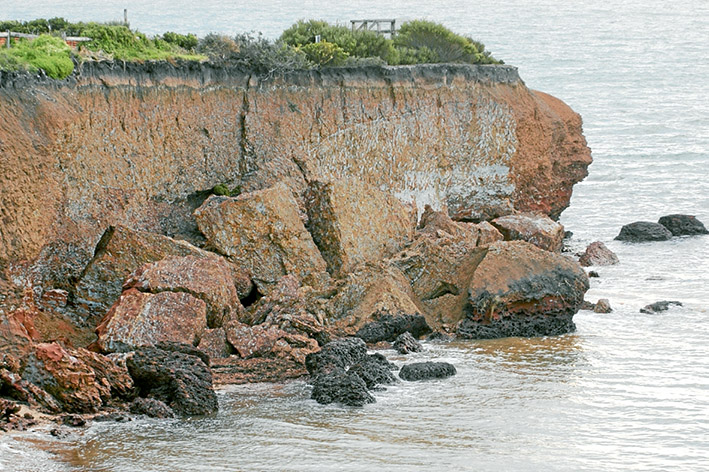 Violent crumble: The Mt Eliza Foreshore Advisory Group is calling for cliffs at Pelican Point to be stabilised and for a walking track to be completed between Canadian Bay and Daveys bays.
Share
Facebook Twitter LinkedIn Pinterest Email

A RATEPAYER group is calling for surveys to make sure public land has not been included within the fence lines of multi-million dollar clifftop properties at Mt Eliza.

And once the surveys are done, the group wants a walking track built along the clifftop from Jacksons Rd to Pelican Point, near Daveys Bay.

In a budget submission to Mornington Peninsula Shire, the Mt Eliza Foreshore Advisory Group (MEFAG) says the proposed walking track would provide the “missing link” between Canadian and Daveys bays.

The submission ranges from calling on the shire to stop nudists from leaving the “optional dress” area of Sunnyside beach, to managing car parks, off-lease areas for dogs and updating aerial images on the shire’s website.

The group says a new path on the cliff would fix the lack of beach access cause by erosion, rising sea levels and exposed rocks.

It alleges Crown land between Jacksons and Freemans roads “has been ‘acquired’ by several abutting landowners as ‘their land’ and most of these landowners frown on anybody who ventures along the top edge of the cliff face”.

MEFAG chairman Des Berry says the shire should survey the land and then “negotiate fencing options” with property owners and protect a known Aboriginal midden before building a path which would also serve as a firebreak.

He said the need for a path had been “highlighted since the closing of the Pelican Point lookout and beach access path since 2009”.

The realignment of boundaries in high value property area is not without precedent as in late 2009 the shire forced the demolition of a swimming pool belonging to the family of billionaire Solomon Lew.

The MEFAG submission says the Mt Eliza foreshore management plan adopted by council in 2004 had shortcomings and needs rewriting.

If the rewrite was too expensive for council’s planning department “MEFAG members are available to assist owing to members’ skillsets, experience and local knowledge”.

Other issues covered in the MEFAG submission include improvements to the Canadian Bay beach car park which was largely unchanged since the 1970s; calling for a new toilet at Sunnyside Beach, a project accepted by councillors 10 years ago but never realised; replanting trees on the cliffs of Daveys Bay “suspected” of being cut down to improve views: stabilise cliffs at Pelican Point where a lookout and walking track have been closed since 2009.