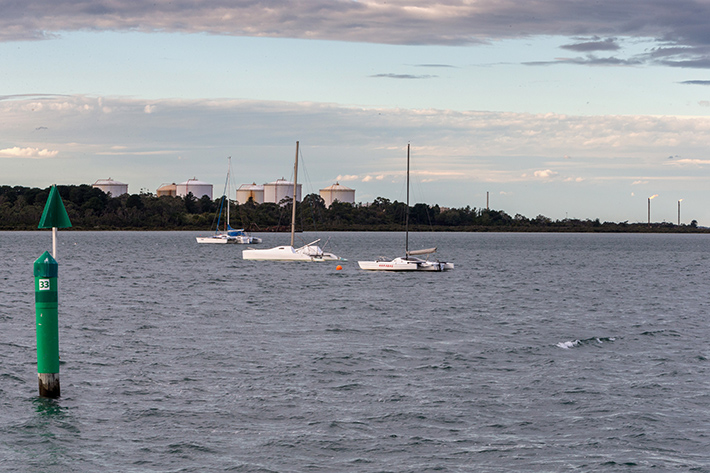 A WARNING has been issued that plans to create liquid hydrogen from brown coal in the Latrobe Valley could ultimately lead to a polluting industry being established in Western Port.

Hastings MP Neale Burgess says Kawasaki Heavy Industries has signed a “secret deal” with the state government that could lead to “long coal trains or a coal slurry pipe bringing huge amounts of coal to Hastings, building of a huge coal gasification plant at Hastings and the produced hydrogen being shipped through Western Port”.

Mr Burgess was last Thursday turned away from a meeting between the Port of Hastings Development Authority and Kawasaki executives.

Afterwards, in an email, the authority’s chief financial officer Mark O’Donnell said he had been advised “that if a member for parliament is seeking any information in relation to the Port of Hastings Development Authority they should direct their inquiry to the Minister for Ports [Luke Donnellan]”.

Flinders MP Greg Hunt said he was “utterly opposed” to Western Port being used as a coal port “and I have made it clear that Crib Point should not be reindustrialised for hydrogen or bitumen”.

It is understood Kawasaki is building a ship to transport liquid hydrogen which would initially be produced at a pilot plant in the Latrobe Valley.

If proved viable, a much larger plant would be built at Hastings.

Environmentalists argue that the process adds to Australia’s carbon emissions while Japan gets the benefit of a much cleaner fuel.

The state government is known to be looking for ways of providing jobs in the Latrobe Valley which is about to be hit by the closure of the Hazelwood power plant.

Mr Burgess said documents obtained under freedom of information “confirmed that the Andrews government is actively pushing the use of Western Port for toxic and unwanted substances, including coal and urea”.

The government – while awaiting recommendations from Infrastructure Victoria on where Victoria’s next container port should be located – has previously stated the Port of Hastings should be used as a “bulk port”.

Previous Labor government’s had promoted Western Port as the preferred site for a container port, but the Andrews government has indicated its best option as being Bay West, in Port Phillip north of Geelong.

Mr Burgess said the state government “has again not even seen fit to consult with this community; instead deciding to keep its dirty deal a secret”.

“Locals will remember the long and ugly fight to stop the Bracks and Brumby Labor governments from allowing a bitumen depot to be built on the foreshore at Crib Point, with then Planning Minister Justin Madden personally intervening to give it the go-ahead.”

After the Coalition came to power in 2010 Mr Burgess (Liberal) said he had had “the honour and satisfaction of making the phone call to tell the proponents of the bitumen plant that they no longer had permission to build in Crib Point”.

“The Coalition supports the exploration of uses for our valuable brown coal deposits and although there is a lot of work to be done to make it viable, its conversion to hydrogen is one of those potential uses,” he said.

“However, the Coalition was clear while in government and has confirmed in opposition, that Western Port is the location of Victoria’s second container port and that it would not be used for any of the toxic purposes the Labor Party had previously earmarked it for, including coal, urea and bitumen.

“Western Port is not the appropriate place to ship coal to, whether via long coal trains, slurry pipe or any other means, or to develop a huge gasification plant for turning that coal into hydrogen.

Mr Burgess said the government should explain its plans at a public meeting “so that this community can have a say in what we want for our future and the future of our children”.

“We will not just sit back in silence and watch Labor turn Western Port into a toxic dump.”