Fencing off the Pillars 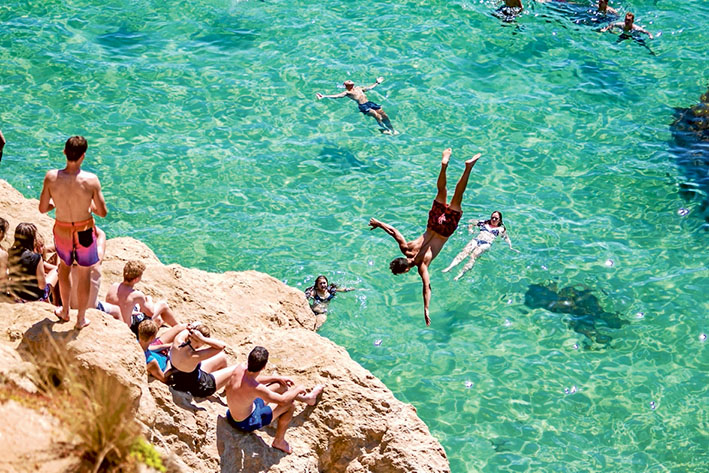 TOURIST hotspot the Pillars at Mt Martha will be fenced off for two years in a bid to stop further deterioration of the registered Aboriginal heritage site and appease residents appalled by young thrill-seekers trashing their neighbourhood.

As well as erecting a $200,000 180-metre fence, the shire will meet with Aboriginal Affairs Victoria and the Department of Environment, Land, Water and Planning to “reinforce and protect” the cultural heritage values of the site in accordance with the Aboriginal Cultural Heritage Act.

It will also write to DELWP to seek its “direction and advice” on putting in place legal processes to prohibit public access to the Pillars.

It will cost a further $60,000 to place a shire officer at the site to “promote awareness and educate visitors on the need to close the Pillars to protect the cultural heritage, preserve the natural environment and reduce the number of visitors jumping of the cliff face”.

The fence will also require an estimated $20,000 a year to maintain.

There will be no action taken to prevent boats or jet skis delivering jumpers to the cliffs and no real way of stopping people walking around or over the fence.

The two-metre high fence was agreed on at a special council meeting Tuesday night and backed by all councillors except newcomer David Gill, who said later the shire should ban visitors from the site.

“Unless we have a ban it will not stop people climbing up from the water and doing the same damage. It’s a waste of money.”

The council has been in a tight corner as it seeks to balance resident outrage at the swamping of their streets with illegally parked cars, litter, vandalism, cliff erosion and, often, aggressive youngsters from other suburbs, with its pledge to promote tourism to the natural attractions of the foreshore between Ellerina and Bay roads.

Tired of carrying the can, it has now determined on a fall-back position: If the shire does not receive support from DELWP for the fencing, it will hand back its coastal management responsibility for the foreshore to the state government.

Cr Antonella Celi, who moved the fence plan, later said the council had always encouraged visitors to the foreshore but that “it got out of hand” at the Pillars.

“We have always wanted to promote tourism and we have done that; we have encouraged them here.

“There are other places on the Mornington Peninsula and now it’s a matter of dispersing people from the one place.”

Cr Celi said it was beyond the council’s powers to ban people from the site – which is a coastal reserve – but that total prohibition would give compliance officers the right to fine illegal visitors.

The council would work to restore the site’s heritage values, she said. “We have always been aware of the heritage concerns at the Pillars and will work to protect the natural environment there.”

The mayor Cr Bev Colomb confirmed the shire wanted to encourage visits to the peninsula’s coastline and hinterland, but that the Pillars had become an “unwanted attraction to many residents and the shire has sought to take action”.

“We are committed to protecting the Pillars from the high level of pedestrian activity that is causing damage and erosion to one of our Aboriginal cultural heritage site,” she said.

“Cultural heritage sites are extremely important to the shire, the Aboriginal community and local residents and we are determined to preserve this beautiful landmark.”

She said injuries to young thrill seekers had required attendance by emergency services personnel and a rescue by the air ambulance.

“Many steps have been taken to limit visitation, particularly over the summer months, including installation of cliff warning signage, parking restrictions, bollards placed in strategic locations along the Esplanade and regular patrols by shire rangers and Victoria Police,” she said.

“Despite these measures, local residents have still raised concerns in relation to litter, environmental impact, illegal parking and anti-social and offensive behaviour.”

Mt Martha Resident Action Group members are relieved that “finally some action will be taken, but also disappointed that it had to come to this”.

A member who asked not to be named, said the fence was not an ideal outcome for the local community “because locals will no longer be able to visit the Pillars”.

“A small minority has ruined it for everyone else, and the sheer number of people visiting the site is totally unsustainable in a residential neighbourhood with no parking and no facilities for visitors.”

The group says fencing off the site is the only viable short-term option until a longer-term solution is found.

He said preserving Aboriginal cultural heritage was a legitimate justification for the fence and “the only means council has to put a halt to the blatant disregard many visitors have for our coastline and local amenity”.

Mt Martha Resident Action Group says a path and boardwalk from Mt Martha to the Pillars and, eventually, Safety Beach, would provide safe access to the coast for pedestrians and cyclists.

The group believes a feasibility study should be done so that in a few years the Pillars can be properly managed and safely enjoyed by locals and visitors, with parking in designated areas and not local streets.

Mornington MP David Morris said the council had “done the right thing” in voting to fence the Pillars.

He said the council had tried hard to work with the state government only to be ignored. “I raised the issue twice in Parliament in 2016, most recently in early September, in the hope of getting some action prior to the warmer weather,” he said.

“Unfortunately, the only response was a letter from Environment Minister [Lily D’Ambrosio] saying the problem was one for VicRoads – in other words ‘not my problem’.

“[Yet] just 10 days before – on 25 October – she had announcing funding for risk mitigation at the Pillars.”

Mr Morris said the government had left the council to do the heavy lifting. “Meanwhile the local community, and our local council, is left to try and clean up the mess.”