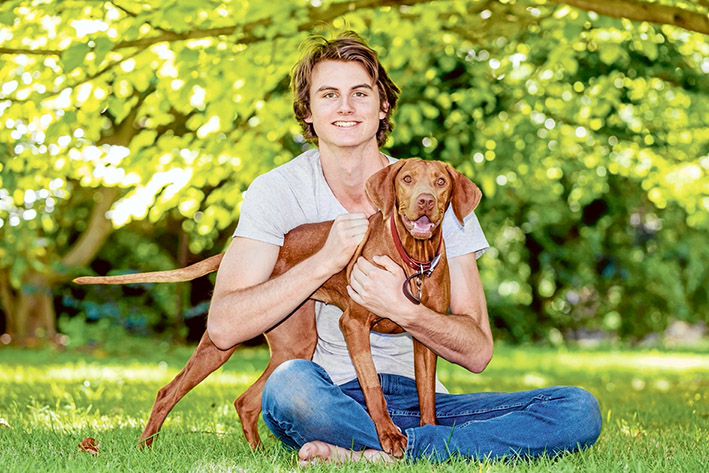 A SHOREHAM dog has survived a bite from a deadly tick species that was thought not to exist on the Mornington Peninsula.

The bite from the Australian paralysis tick (Ixodes holocyclus) – which frequents the east coast of Australia, including Lakes Entrance and Bairnsdale – had paralysed the Hungarian Vizsla, named Piper, causing body weakness and a changed bark.

Realising her 14-month-old pet was gravely ill – and suspecting a tick bite – owner Heather Geschke rushed it to Hastings veterinary clinic and found the engorged parasite under her dog’s collar while they sat in the waiting room.

“It was fairly obvious as it was a fair size,” Ms Geschke said. “Once in the surgery the vet whipped it out very quickly.

“I had recognised it as tick paralysis as a previous pet had been affected, but I was told we don’t get them here.”

Ms Geschke said Piper had not been away from home and other family members had not travelled to tick-prone areas, such as East Gippsland.

Veterinarian Dr Matt Ray said after being diagnosed the dog was taken to the pet emergency centre in Frankston and treated with tick antiserum. “It has since made a full recovery thanks to this fast treatment,” he said.

A parasitologist had confirmed the tick as Ixodes holocyclus.

“If this tick establishes itself in local wildlife it may be a regular and potentially life-threatening problem for pets on the peninsula,” Dr Ray said.

The recent warm, wet weather and people and animals holidaying in tick-prone areas, may have helped the tick establish itself on the peninsula.

“It is possible that the wet weather over summer has changed the normal distribution of this tick,” Dr Ray said.

Signs of tick paralysis include weakness, especially in the hind legs. As the condition progresses pets may be unable to stand, or suffer regurgitation, vomiting or breathing issues, including coughing in advanced cases.

“Treatment is critical to survival and includes administration of tick antiserum and hospitalisation to monitor for worsening signs,” Dr Ray said.

He said tick prevention was especially important in spring and summer. This can include a variety of oral and topical medications or collars.  Daily tick checks at these times of year are still required even when a pet has been treated.

It is important to look all over the dog or cat, including inside the lips and mouth, under the collar, under the tail, between the toes and in the ears. “Ticks may be engorged and easy to see but can also be small and difficult to find,” Dr Ray said.